Justin Gaethje has pushed for a bout with Conor McGregor in the past. But, following an incident where the latter struck an elderly man, it sounds like Gaethje wants to fight the star more than ever.

Justin Gaethje is booked to fight Donald Cerrone at UFC Vancouver on September 14th, but, the lightweight contender is still targeting a showdown with Conor McGregor after that. In fact, the former WSOF champ wants to inflict some payback on McGregor, on behalf of the man the star reportedly punched earlier this year. 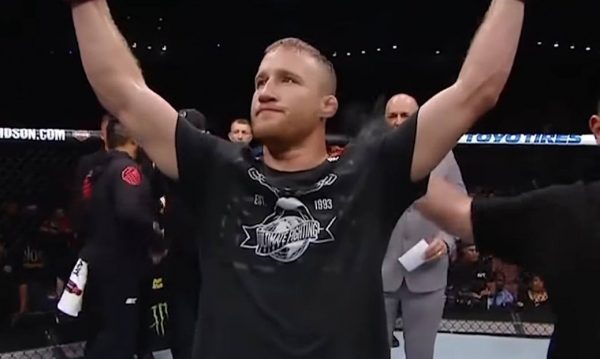 Unless you’ve been living without electricity or any type of modern technology the last couple of weeks, chances are you know about McGregor’s latest incident. Recently a video surfaced which captured McGregor sucker punching an elderly man in a Dublin pub earlier this year, after he reportedly refused a shot of the star’s whiskey, and words were exchanged.

McGregor has since apologized for how he acted. During the same interview in which he did so, the former featherweight and lightweight champ mentioned that a bout with Gaethje was being discussed earlier this year, before he broke his hand.

Well, since then, Gaethje spoke with TMZ. While talking about the possibility of fighting McGregor, and the latter’s pub incident, the dangerous fighter said this (quotes via MMA Mania):

”I feel like I’ll fight him one day,” Gaethje said. “Probably after Cowboy. The winner of this fight, so long as it’s impressive. If he’s coming back, it has to be someone like me, like Cowboy. It ain’t gonna be a Tony. It could be the loser of Khabib vs. Poirier, but I doubt he wants to do that. So the next option is the winner of me vs. Cowboy if he wants back into the mix. He’s ranked number 3 right now, that’s crazy to me. But he’s got a lot of power.”

”He hasn’t fought in two and a half years, but he just has to fight and we’re talking about it. He brings the most attention, he’s the biggest superstar in this sport, he’s not even fighting and he’s still the biggest superstar. So of course I want to f**k him up. I see him punch an old man, do I want to punch him for that? F**k yeah, I want to f**k that dude up for s**t like that. He looks like a crackhead on your video.”

Gaethje clearly has no issues speaking his mind huh? Now, could Gaethje – McGregor happen? If “The Highlight” scores a big win over Donald Cerrone at UFC Vancouver? It might. Especially if Khabib Nurmagomedov beats Dustin Poirier September 7th, as, there’s been no indication that Khabib would agree to grant Conor a rematch (who hasn’t won a fight since 2016). There’s no question the masses would love to see McGregor and Gaethje throw down.