Next month, Errol Spence Jr. and Shawn Porter will meet in a title unification match live on FOX Sports pay-per-view from STAPLES Center in L.A.

“This is what I’ve been waiting for. I had to be on the sidelines and watch Shawn fight Keith Thurman and Danny Garcia, but now I’m in that group. I have the opportunity to fight these top guys and make my name known,” Spence said. “My whole thing is that I’m looking for the stoppage. I want to make a statement that I’m clearing out the division. I want Manny Pacquiao and all of the top names in this division.” 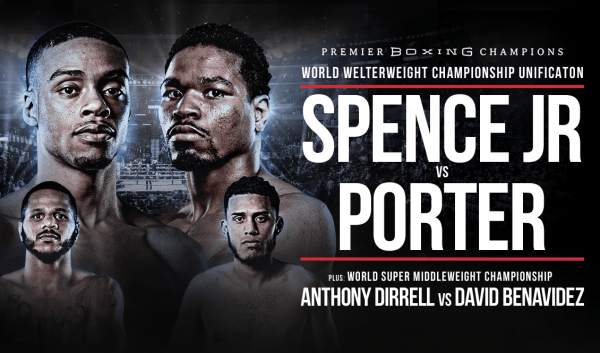 Spence, a 29-year-old from New York, has held the IBF title since 2017. Prior to turning pro, he won three consecutive United States national championships and represented the U.S. at the 2012 Summer Olympics, reaching the quarterfinals. Related: Errol Spence Jr. Vs. Shawn Porter, Title Vs. Title, This September

Errol Spence Jr. Has Grown Into A Champion

“You’ve seen my growth over the years to where I’m fighting in bigger and bigger stadiums and headlining the pay-per-views. Now I’m in a unification fight, which is what I’ve wanted for a long time,” he said. “I know Shawn will keep this same energy on fight night. It’s going to be an amazing moment when I get this knockout at STAPLES Center.

“Shawn is a warrior who always comes to fight and leaves his heart on the table. He always comes ready, but I’m in shape and ready for him too. We’re both always in exciting fights and that’s what we’re going to give the fans.”

Back in 2017, Spence scored an 11th round knockout victory over Kell Brook for the IBF title. In 2018, he successfully defended it vs. both Lamont Peterson and Carlos Ocampo, finishing Peterson in the seventh and Ocampo in three minutes. Last March, he downed Mikey Garcia in one of the biggest bouts in boxing, as the event was held at AT&T Stadium in Dallas.