Sergei Kharitonov has had plenty of time to think and prepare for Matt Mitrione.

Flash back to Bellator 215 earlier this year when the two heavyweights had their bout come to a disappointing end just 15 seconds in after Mitrione landed an accidental groin kick.

The fight was called off for that night, with officials looking to reschedule Kharitonov and Mitrione for as soon as possible. Related: Matt Mitrione-Sergei Kharitonov Headlines Bellator 225 [1] 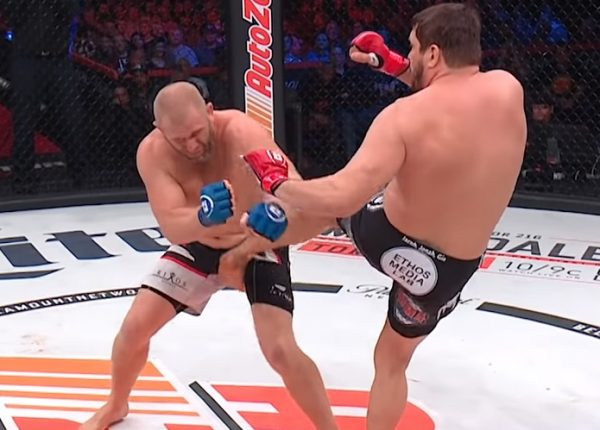 That time is this Saturday night, as they meet again in the main event at Bellator 225 [2] from the Webster Bank Arena in Bridgeport, Connecticut. The card airs live on Paramount Network and streams via DAZN [3].

Khartinov, who recently celebrated his 39th birthday, feels a victory over Mitrione would position him nicely for the winner of the upcoming heavyweight title fight between champion Ryan Bader and challenger Cheick Kongo.

“Yes, I have that feeling,” Kharitonov told FightLine [4].

The sport of MMA – and kickboxing for that matter – have allowed the Russian to compete for many promotions including Strikeforce, PRIDE, DREAM, M-1 Global and GLORY. He has found quite the home with Bellator and Scott Coker.

“I really like the Bellator promotion, I like the organization team, the very good quality of the events,” he said. “And I am very pleased to work with such a highly professional promoter as Scott Coker.”

While he lives overseas, Kharitonov has made numerous appearances in the U.S. That has allowed him to prepare for his body and mind. Related: Bellator 215 Results [5]

“I have been fighting in the USA for a long time and feel quite comfortable here,” Kharitonov said. “There are small problems with acclimatization, so I try to fly to the USA in advance 2-to-3 weeks before the fight.”

As for getting another shot at the former Ultimate Fighter competitor, Kharitonov is excited and ready.

“After our first fight, I really wanted to get my revenge as soon as possible,” he said. “It was very easy to prepare psychologically, since there was a feeling of unfinished business.”

Overall, Kharitonov is unbeaten in his last seven fights, going 5-0 with two no-contests. He has knocked out Roy Nelson, bested Joey Beltran, and finished both Rameau Thierry Sokoudjou and Chase Gormley.

This marks just the second major MMA event to take place in Connecticut proper, following CES 56. The state has held plenty of cards before, but those came on tribal or reservation land. The Connecticut Boxing Commission will oversee the action.