Candice LeRae [1] has been standing out in the NXT women’s division. Her match with Io Shirai at NXT TakeOver Toronto was spectacular and she is bound to be a big addition to the main roster in the nearby future. That transition could happen sooner rather than later too, as Bayley has asked Candice if she is interested in a match at the Clash of Champions pay-per-view.

Early this morning, Bayley asked Candice LeRae [5] if she is interested in a match at the WWE Clash of Champions pay-per-view. As Bayley is the current SmackDown Women’s Champion and since there is a lack of potential challengers, this could genuinely happen.

Since Candice LeRae lost her match against Io Shirai at NXT Takeover [6] Toronto, a match on the main roster is not such a bad idea. Her style is reminiscent of Johnny Gargano, which is coincidentally her husband. I can imagine she would be a great addition at Clash of Champions. It is a must-watch where bookings are concerned.

Who Is Candice LeRae? 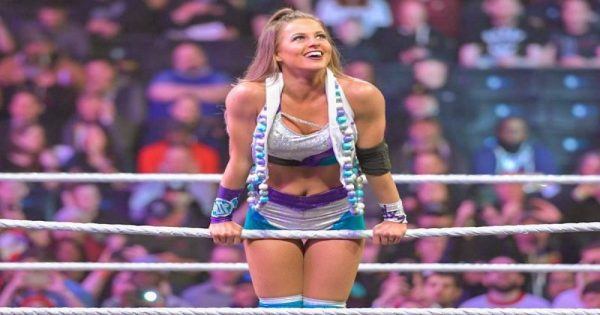 If you do not watch NXT and if you are not familiar with Candice, here is the lowdown on this WWE superstar.

Candice LeRae [7], real name Candice Gargano, was signed by the WWE in 2017. If you watch the indies, you might be familiar with her already, as she wrestled for promotions such as Pro Wrestling Guerrilla and DDT Pro-Wrestling.

LeRae started her wrestling career at the Empire Wrestling Federation (EWF) and the International Wrestling Council. Even though she started as a substitute, she would soon become a staple within the promotion.

As her real-life name already suggests, Candice is married to NXT superstar and future WWE legend Johnny Gargano [8]. The pair got married in 2016 and they have been involved in numerous storylines together; this includes the feud Gargano had with Tommaso Ciampa.

Not many people realise that Candice LeRae has also made an appearance at TNA, now Impact Wrestling. In 2013, she took on the current TNA Knockouts Champion Gail Gim. Unfortunately, she lost the match.

Interestingly, LeRae is the only woman who ever won the PWG World Tag Team Championship alongside Joey Ryan, another well-known indie wrestler. Unfortunately, Candice still needs to win a title in NXT.

Candice made her NXT debut in an NXT Battle Royal in 2017, which searched for a first contender to take on Asuka for the title. She was eventually eliminated by Billie Kay. In July 2017, she would also participate in the Mae Young Classic. She made it to the quarter finals, where she was eliminated by none other than the current NXT women’s champion Shayna Baszler. She would eventually sign her contract with the WWE in January of 2018. She would become involved in various feuds alongside her husband Johnny Gargano; this included Tomasso Ciampa and Andrade “Cien” Almas.

While Candice has been somewhat in the background at NXT, she recently gotten a bit more into the spotlight. The recent match with Io Shirai should be just the start for Candice, which leaves us very excited for her future.