Imagine leaving the loving embrace of the UFC, flying all the way to Macau, China, to compete in an MMA event, and then getting stiffed on your paycheck. That would suck, right? Well, that’s what happened to Will Brooks, Gleison Tibau and Bryan Caraway, according to TheBodyLockMMA.com [1].

The promotion–Battlefield FC–has a history of bailing on its bills. But apparently the promoters talked a good enough game to convince fighters to get on board the crazy train again.

Heck, it sounds like they even screwed the referees [2] out of payment.

According to a Facebook post from Steven Perceval, an MMA referee who has officiated numerous bouts in the UFC and beyond, he and the remaining officials originally slated to work at Battlefield FC 2 in Macau, China, decided not to work the event as a result of “bad organisation and broken promises by the promotion.”

It took a year for the fighters on the first card (like Sarah Kaufman) to get paid. Things might not be so grim for Saturday’s participants, although their ordeal truly isn’t over until the cash goes into their bank accounts, so who knows.

Latest update from the “matchmaker” at Battlefield. pic.twitter.com/XtLxIrikaH [3] 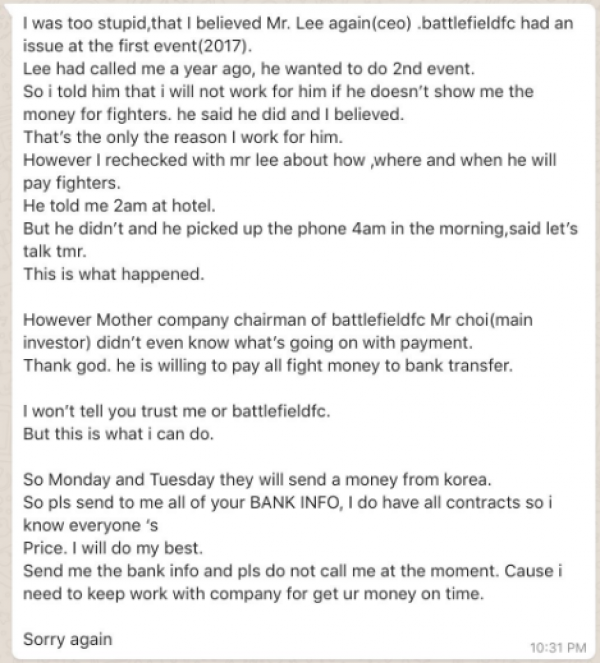