ONE Championship CEO Doesn’t “Know What All The Hoopla Was About”, Defends Booking Cosmo Alexandre – Sage Northcutt

ONE Championship took a lot of heat for tapping Sage Northcutt to fight Cosmo Alexandre. But the promotion's CEO is defending that decision, and believes "Super" could still be a multi-sport champ.

After Sage Northcutt was quickly and viciously knocked out by Cosmo Alexandre last month, plenty of people in the MMA world piled on ONE Championship for booking the match-up. But, ONE CEO Chatri Sityodtong is not only defending the promotion’s decision to go with that fight, he believes Northcutt could still become a champ in kickboxing, MMA and Muay Thai… 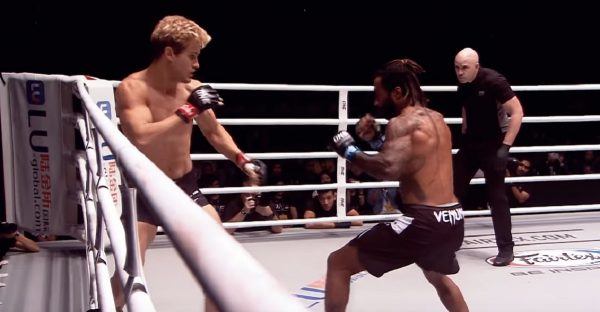 Northcutt faced Alexandre at ONE’s “Enter the Dragon” card in May, in what was his promotional debut. The UFC vet was quickly floored by an Alexandre right hand, however, and the blow also broke Northcutt’s face in multiple places.

Before the fight occurred, quite a few observers noted that Northcutt could have a tough time with the 80 plus fight veteran and noted kickboxer. But, after the loss and Northcutt’s hospitalization, critics fired away at ONE and Northcutt’s camp for making the fight.

Well, more recently Sityodtong spoke with MMA Junkie. While discussing the decision to make that fight, as well as “Super’s” future, he said this:

“My plan is the same,” Chatri Sityodtong said. “I really believe that Sage has the talent, has the potential, to be a three-sport world champion.”

“…All the negative fan talk in the States about Sage being sent the toughest monster in ONE is far from the truth,” he said. “Cosmo is a very tough, tough, elite fighter, but again, he’s only 7-1 in MMA.

“I don’t know what all the hoopla was about, but yes, Cosmo is a world-class striker. And again, it’s because we have 140 world champions in ONE Championship. That’s what people don’t realize. The roster here is so deep and so talented, from any organization, you can’t just walk in and expect to dominate.”

So, there’s a couple of things to look at here. On one hand, it’s nice to see that Sityodtong isn’t piling on Northcutt following the loss, and that he’s reporting he still has confidence in the young fighter. But, the comment about Alexandre only being 7-1 in MMA, might not muzzle too many critics. While that’s true, Northcutt’s rep isn’t one of being a wrestler and grappler who could more easily negate Alexandre’s striking. Further, you have to question whether Sityodtong would publicly admit that maybe they overestimated Northcutt’s abilities, if indeed, they’re thinking that.

All this aside, hopefully Northcutt has a speedy recovery, both physically and mentally, from the devastating defeat. Not all fighters are able to come back from this type of defeat.