LeAnn Rimes grew up in the limelight. The Country singer first made waves at the tender age of 13 and has amassed a large following of fans over her lifetime. But recently, some of those fans are upset about the “How Do I Live” singer’s choice of tattoo [1].

She probably wasn’t expecting any controversy over her new religious tattoo. After all, it’s straightforward and simple without any artwork. But, two words inscribed on her arm sent some fans into a tailspin as they felt it was disrespectful.

Like many Country artists, LeAnn Rimes isn’t afraid to highlight her Christianity. She had “god’s work” inscribed below the inside of her elbow as a reminder that we are all magnificent products of God’s creation.

Thank you @winterstone for my beautiful new ink! You are a LovE! #tattoo #tinytats #ink #godswork #script #art [2]

Rimes has ten tattoos, but this latest religious one courted some complaints from fans on Instagram. While the intent was positive and minimalist, some objected to the lowercase cursive spelling of God. 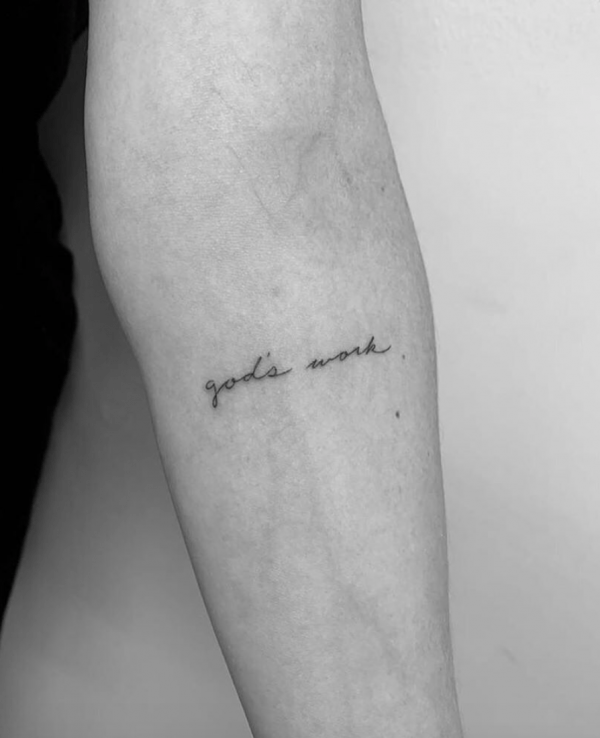 Instagram user val_miller_333 wrote, “Yes, He knows our hearts but there is a reverence that always needs to be showed to our Father. I am 54 years old and I have never not capitalized the g in God nor written he or him. It is showing respect to the utmost High and our Heavenly Father. I rarely comment but, had to speak up truth.”

That wasn’t the only complaint. There were numerous ones, including haderandree who shared, agree very disrespectful 2 our G-d dont write name in vain” about the singer’s latest tattoo.

Instagram user citygenesis came to Rimes’ defense. She wrote, “Some are pointing out to LeAnn that God is spelled with a capital G, not a small g. Although there is one Truth, remember everyone’s interpretation of the truth is different. In everyone’s mind theirs is the real truth. That’s how the brain works. We connect to information that make us feel good, and it is assimilated into our belief system. Remember everyone’s journey is different. If you’re a believer like me, remember how you went from doubt, to belief, to faith. Remember everyone’s belief system is not like yours. Btw, I’m sure LeAnn knows the difference between God & god and she wrote it exactly how she wanted to, in how it’s meaningful to her.”

Rimes was grateful for the support and responded to the comment with a heart.

Art is subject to interpretation and the bottom line is that some fans objected to LeAnn Rimes’ new tattoo. Sharing on social media is always going to open someone up to controversy and that’s exactly what happened.