Aljamain Sterling wasn't one of the bantamweights Henry Cejudo called out after his win at UFC 238, and the "Funk Master" had some interesting thoughts on that.

After Henry Cejudo became the UFC’s last champ-champ on Saturday, the decorated fighter called out Dominick Cruz, Cody Garbrandt and Urijah Faber. Well, the man who scored an impressive and pivotal win over Pedro Munhoz at UFC 238, Aljamain Sterling, understandably isn’t a fan of that fact… 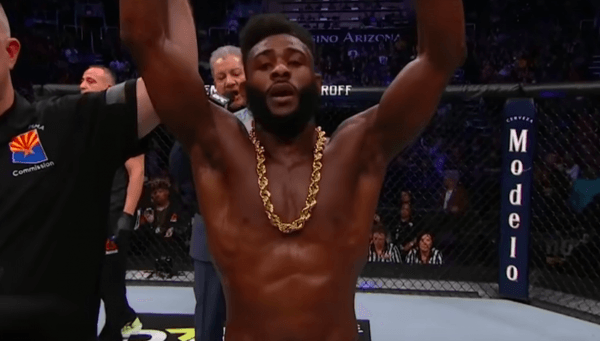 Cejudo laid claim to the bantamweight title in the card’s main event, by stopping Marlon Moraes in round three. Earlier that same evening, the #3 ranked Sterling worked his way to a memorable, decision win over the always dangerous, #4 ranked Munhoz. But, after Cejudo’s thrilling win, he challenged the fighters mentioned above, none of whom, have recorded a victory since 2016.

Well, Sterling appeared on the most recent “MMA Hour“, and while discussing Cejudo’s call outs, the New York fighter said this (quotes via MMA Fighting):

“Because he wants to be the ‘Legend Killer,’” Sterling laughed. “Oh my goodness, you want to fight guys who haven’t won a fight in god knows how long? I don’t know if he’s scared or — I can’t call him scared because he’s fought some of the baddest men in our weight class’ history. But to be calling out guys who haven’t won a fight in three years or guys coming out of retirement who are 40 when you’ve got young, hungry competitors who are well deserving of a shot, I think there’s something wrong with that.”

Ya. Sterling’ right to not call Cejudo scared, as clearly the decorated wrestler hasn’t been facing cans. But, Sterling isn’t the only person who has questioned  the champ-champ’s call outs. Cruz and Faber are legends, but the latter hasn’t fought since 2016 when he defeated Brad Pickett. Cruz, meanwhile, has yet to fight since he lost the belt to Garbrandt that same year, and “No Love” has lost three in a row.

Raphael Assuncao, who is ranked #2, is coming off a loss to Moraes. So, from a meritocratic perspective, Sterling has a very, very solid case for a title shot. While discussing how he thinks he matches up against Cejudo, the well rounded fighter said this:

“I bring the funk,” Sterling said. “It’s a different style. Even when I teach my MMA classes in the gym, it’s hard to teach what I do. It’s more of state of flow, a state of feel. It’s not a robotic thing like one, two, three, kick, one, two, three, switch, jab, cross. It’s completely unorthodox. Everything is about rhythm, tempo and pace. It’s a different style, man. When you factor the wrestling, the scrambles, the jiu-jitsu, I think I’m a tough matchup in this division for anyone.”

So, we’ll see what happens. Dana White shot down Cejudo’s call outs as well, and he also praised Sterling for his performance. Maybe Sterling will get his title shot?