Rafael dos Anjos was outwrestled and outscored by Colby Covington and Kamaru Usman in his last two fights, but the former lightweight champ had answers for Kevin Lee tonight at UFC Rochester. [1] 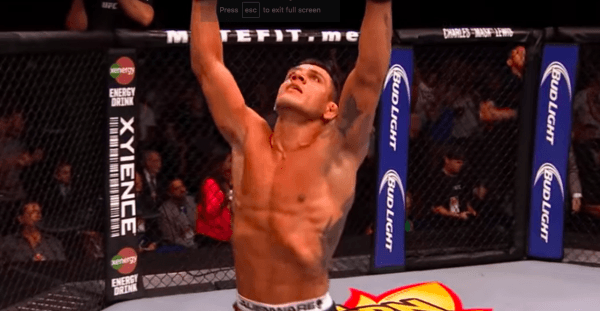 Both welterweights came out firing heavy kicks, and not long after, Lee momentarily took dos Anjos to the mat. After a couple of striking exchanges, Lee pushed RDA to the cage and started working on another takedown. Dos Anjos defended, however, and grazed Lee with a head kick that wobbled the noted grappler. Moments later, RDA shot in and took Lee down, but the latter quickly got back up-and-out.

Not long into round two, Lee scored with a TD, but RDA popped right back up. Dos Anjos nearly landed with another head kick, and proceeded to shoot in again. Lee defended and resumed pressuring the former 155 champ. RDA defended Lee’s takedown attempt along the cage, and the two traded shots moments later.

Dos Anjos came out aggressively to begin round three, and he took Lee down with a nicely timed takedown. Lee worked his way out, but in the ensuing scramble, RDA took his back. Lee defended well, however, and an extended grappling battle ensued along the fence.

Shortly into round four, RDA took a kick low but he shook it off and the fight resumed. After they traded hard leg kicks, Lee shot in, and another grappling session began. The fight remained standing, and Lee shot in after another striking exchange. RDA squashed the TD attempt, wound up in mount, and slapped on a fight-ending arm-triangle-choke.

Here are the complete results for UFC Rochester.