Surprised by The News Frankie Edgar’s Likely Fighting Max Holloway? You Shouldn’t Be

It's being reported Frankie Edgar will likely challenge Max Holloway next, and not Alexander Volkanovski, and this news shouldn't be shocking...

As it stands right now, it looks like Frankie Edgar, and not Alexander Volkanovski, has been tapped to challenge Max Holloway next. If you’re shocked by this news, then you probably haven’t paid close attention to how the UFC’s been doing business lately. 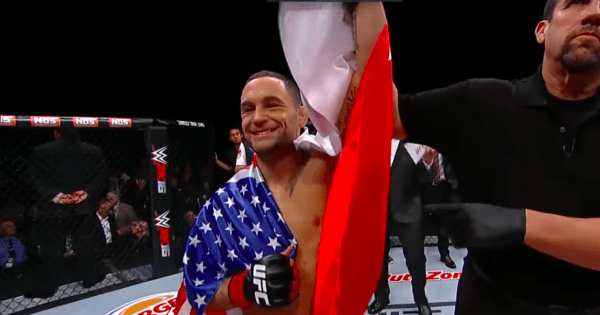 ESPN is reporting that multiple sources have confirmed that a fight between Edgar and the featherweight champ Holloway, is closing to being finalized for July 27th. UFC 240 is going to go down that day in Edmonton, Alberta.

This news arrives not long after Volkanovski outscored the legendary Jose Aldo at UFC 237 this past weekend, to record his seventh straight win in the Octagon. Since Aldo was ranked #1 leading into the event, and because of Volkanovski’s aforementioned run, the rising star called for a title shot. In fact, prior to the event, Volkanovski argued that if he beat Aldo, there should be no question that he deserves to fight for the belt next.

Before UFC 237, the consensus seemed to be that even if Aldo won, he wouldn’t advance to a fight with Holloway. The reason being that he’s already been defeated by “Blessed” twice. In that scenario, there was little doubt that Edgar would get the title shot he’s been campaigning for.

Well, that didn’t happen, and from a meritocratic perspective – taken with an assessment of recent wins – there’s no question that Volkanovski should be fighting for the belt. While Edgar is coming off a win over longtime contender, Cub Swanson, he’s only one win removed from a quick KO loss to Brian Ortega. Further, it wasn’t that long ago, really, that the former lightweight champ lost to Aldo for a second time.

So what gives? Well, while Volkanovski’s performance on Saturday was ridiculously impressive, he didn’t score the type of win that left the masses buzzing. For example, if he had quickly bombed out Aldo, the UFC would probably have a much tougher time selling Edgar’s title shot.

But, at the end of the day, Edgar is justifiably one of the most beloved fighters in the sport, particularly in the North American market. Volkanovski floated the idea of facing Holloway at the UFC’s planned card in Australia later this year. But that card doesn’t need any help, since it will feature Australia’s own, Robert Whittaker, battling New Zealand’s Israel Adesanya.

Further, from a pay-per-view perspective, everyone and their dog knows that currently, Holloway – Edgar, will outsell Holloway – Volkanovski. For purists, that doesn’t mean the latter match-up should be pushed aside. But, we’re living in a time where Brock Lesnar was going to get a title shot. When folks with no pro-bouts (CM Punk), are getting UFC contracts. In other words, Holloway – Edgar was likely off-and-running, the second the final horn went for Aldo – Volkanovski.