Rafael dos Anjos [1] got back on track last night at UFC Rochester [2], and afterward, he reported he’s still driving to win another UFC title. But, where does RDA’s victory over Kevin Lee leave the former lightweight champ in this respect? 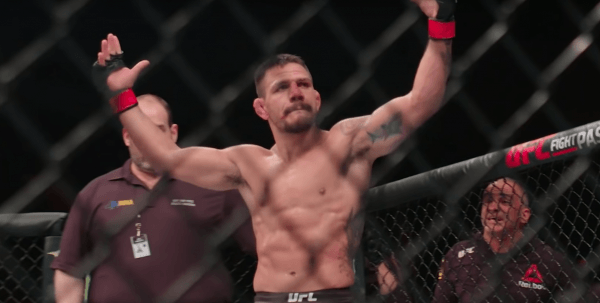 Lee, as expected, came with a lot of pressure and takedown attempts throughout the fight. But, while Lee did take RDA down several times, he was unable to capitalize on the position. In round four, after dos Anjos squashed another takedown attempt from Lee, he quickly worked his way into a fight ending, arm-triangle-choke.

It was a massive win for dos Anjos, as he was coming off decision losses to Colby Covington and Kamaru Usman heading into the bout. Afterward, the 34-year-old had this to say about the win and his plans moving forward (quotes via MMA Fighting [3]):

“Kevin, he’s a tough guy, but he wasn’t ranked. He came up a division now and I think that was a good fight to put me on the winning path. I see the interim champion will fight the champion right now, probably. I’m just open. I’m not sticking too much with the rankings right now, but I have this desire in me.

“I want to be champion one day and if I don’t believe that I’m not gonna be a champion, I’m gonna stop fighting. I’m gonna quit this sport. I still believe I can make it and I’m going to work. I’m working hard on it.”

It’s admirable to see dos Anjos still intends to win the welterweight belt, and when you consider his abilities and what he’s accomplished, it’s not surprising to see he still believes he can. But, taking aside the debate regarding whether dos Anjos could defeat, say, Usman or Covington in a rematch, how far out is RDA from a title shot?

While last night’s win was extremely important, since a third straight loss would have been catastrophic, will it push dos Anjos into a title shot eliminator? Probably not.

While Lee was/is a contender at 155, he’s not ranked in the top 15 of the welterweight division as dos Anjos noted. Further, since dos Anjos isn’t long removed from losses to Usman and Covington, the UFC probably isn’t interested in positioning him for a possible rematch just yet.

Chances are the winner of the July 6th bout between Jorge Masvidal and Ben Askren will advance to face the winner of Usman – Covington, even though RDA is ranked higher than both of them. So, don’t be surprised if dos Anjos gets booked to face the likes of Santiago Ponzinibbio or Darren Till next.