Aleksei Oleinik maybe a master when it comes to choking opponents out, but the heavyweight's reporting he had issues with Alistair Overeem in sparring.

If you ask most folks how Aleksei Oleinik can beat Alistair Overeem on Saturday, 9 out of 10 will likely tell you the only chance he has is via submission. But, recently the Russian heavyweight admitted when he rolled with Overeem a few years back, he couldn’t get anywhere against the legendary fighter. 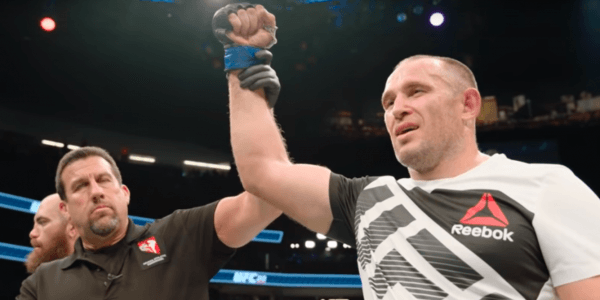 Oleinik will face Overeem at UFC St. Petersburg on Saturday, in what many would label as a grappler vs. striker match-up. Of course, in this modern day of MMA, that narrative is often an over simplification. But, when you consider 8 of Oleinik’s last 10 wins have come via submission, and that Overeem is a former K-1 champ, the label starts to stick.

Well, although Oleinik is widely considered to be one of the most dangerous submission artists in the game, while talking to the media recently, he reported this (quotes via MMA Junkie):

“He fought twice with Fabricio Werdum, and even Fabricio couldn’t submit him or choke him.”

“This is my job,” Oleinik said. “When the UFC proposed this fight to me, I thought for 10 seconds and said, ‘Yes.’ For me, more important to me is the name of my opponent rather than the place it takes place. If the UFC proposed for me to fight in the U.S. or any other country, it doesn’t matter. I just want big-name opponents. That’s the most important thing to me.”

Now, could Oleinik have been taking it easy in the training sessions? It’s possible. Is he just being humble here? And Overeem might have a different recollection? That also could be the case. Further, it is conceivable Oleinik has improved more on the ground than Overeem over the last few years.

So, it’s going to be really interesting to see how this fight plays out. If the 41-year-old Oleinik can’t get it to the ground quick, he could be in some serious trouble against the taller, more noted striker in the “Reem”. “The Boa Constrictor” is coming off a submission win over another feared striker, however, as Oleinik tapped out Mark Hunt in September.

The 38-year-old Overeem, meanwhile, took out Sergei Pavlovich in his last bout, which was in November.