Yogi the dog is a cute little Shih-poo [1] that has received a lot of attention because of his unique human-like face.

The way Yogi looks at people and the fact that he has pronounced lips, a snout, and a brow that seem more human [2] than dog [3], has fascinated many about this unusual pooch.

Many online took notice of his unusual characteristics when Yogi’s owner, Chantal Desjardins, posted photos of Yogi on Facebook. The pictures went viral, which prompted a friend of Chantal’s to upload them to Reddit. [4]

People weren’t exactly sure what to think. One commenter wrote, “I laughed, then I got uncomfortable, now I’m rocking back and forth desperately trying to convince myself it’s just a face swap.”

How unusual Yogi looks is even more apparent when sitting next to a “normal” dog, like Daria. Daria is an eight-year-old Shih Tzu who lives with Yogi. 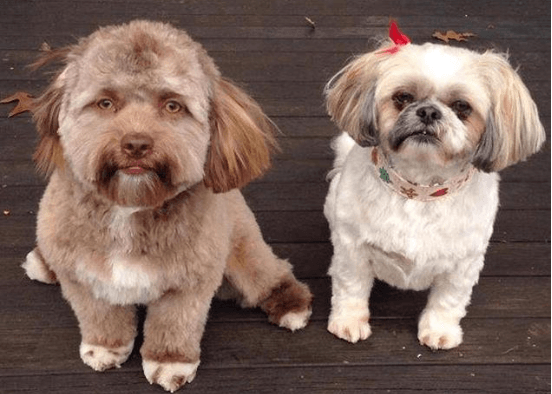 Some on social media felt that Yogi resembled Nicholas Cage or Jake Gyllenhaal, while others drew comparisons with Ed Sheeran.

One person even said Yogi looked like Paul Rudd.

Wow really does & strangely reminds me of #PaulRudd [5] not sure why but does? pic.twitter.com/4p8hXAvxyz [6]

Another compared Yogi to “That 70’s Show’s” Topher Grace.

That dog is Topher Grace pic.twitter.com/FA1pKliqCF [8]

Chantal told the Mirror [10], that she hadn’t used Photoshop or anything else to doctor Yogi’s photos. That’s just how he looks. “It really isn’t [edited],” Chantal said. “I’m not a photographer at all. I think it’s just his eyes and the way he’s looking at the camera.”

“He’s super happy,” Chantal said. “He loves to play and cuddle. It’s funny because I really didn’t see it before. I don’t really see him differently.”

That so many see a human face in Yogi is probably a good reminder that this winter, dogs should be brought inside from the cold. We wouldn’t leave an actual human outside to brave the frigid weather and our furry little friends deserve the same treatment.

Yogi The Dog With The Human Face Is Making The Internet Uncomfortable https://t.co/yiyhj8i0hF [11]