If her entrance music is to be believed, Nia Jax isn’t like most girls [1].

Here are five fast facts you might not know about one of Raw’s most dominant woman.

1. The Rock Is Her Cousin

A little flashback to a few years ago around this time, when my family encouraged me and completely supported me on a journey I never thought I would get to. So many great & CRAZY things have happened since then, but it has all been worth it! There is not a day that goes by where I'm not grateful and feel incredibly blessed! #DamnWeAreGoodLookingPeople #FamilyLove [2]

Okay, so maybe you did know this about her, but Nia Jax is a member of the esteemed – and massive – Anoa’i wrestling family. Dwayne “The Rock” Johnson is her cousin, and it was actually his match against John Cena at WrestleMania XXVIII that inspired her to join the family business.

2. She Was Born in Australia and Speaks German

Jax is truly from all over the place. Her father, Joseph Fanane, is Samoan while her mother, Renate Fanene, is German. But, Jax was born in Sydney, Australia and grew up in Honolulu, Hawaii. Jax has said [5] that she speaks a bit of German due to her mother speaking it in their home while she was growing up.

@miamiherald article by Jim Varsallone quote: “Not everybody is made to be a size 0 or a size 4, and I’m not saying there is anything wrong with being a size 0 or a size 4,” Nia said. “Being my [plus] size is something I’ve had to deal with my whole life. I’ve always been the big girl. I’ve always had curves, and I never could relate to any of the girls like the Victoria Secret models. “Once I realized, when I became a plus-size model, that there were more women like me, my confidence immediately shot through the roof. When I was able to walk out there and show younger girls, who are like me when I was their age — who didn’t see girls who are curvier being put in a beautiful light — it just made me think that I have to be able to show these girls that they are just as beautiful as the girls who are size 0.” [6]

Prior to signing with WWE, Jax worked as a plus-size model in California. While she’s been open about having difficulty accepting her curves and height when she was younger, her time spent modeling helped her to embrace her looks, and she often posts body positive messages for women of all sizes on social media.

4. She Used to Be Best Friends With Alexa Bliss 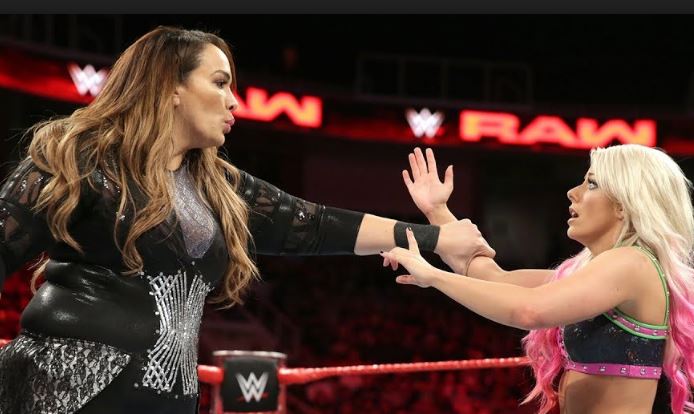 Jax has formed a rather contentious on-screen alliance with Raw Women’s Champion Alexa Bliss, and they used to be best friends in real life but that’s changed. They aren’t besties anymore, but are still close [8].

It began because of a backstage fallout but the exact reason for the same was not unveiled. Nia unfollowed Alexa Bliss on social media platforms raised the speculations higher.

When they were first friends, Jax remarked on Instagram that Bliss was one of the “NXT helpers” at her WWE tryout, and even though Jax bugged her with “a million questions the entire 3 days of the tryout,” Bliss did everything she could to help her out. Not anymore.

Jax spent just one year in NXT before she was called up to the main roster during the 2016 WWE Draft [9]. Many fans believe this was too soon, as evidenced by the fact that she has legitimately injured [10] several wrestlers during her matches. Even so, she’s improved significantly since her early days in NXT and should be a force to be reckoned with if given the right time and opportunity.

What’s your opinion of Nia Jax? Did you learn anything new about her? Share your thoughts and comments below!