Last November, a survey was carried out in order to determine the most popular fast food chain in each state. The results of this survey will likely have

Last November, a survey was carried out in order to determine the most popular fast food chain in each state. The results of this survey will likely have liberals everywhere fuming!

The Today Show reported that the Christian restaurant chain Chick-fil-A blew the other chains out of the water, coming out on top in the vast majority of states. Chick-fil-A came out as the favorite fast food chain in 38 of the 50 states. It should be noted that nine states don’t even have Chick-fil-A restaurants, so a competitor really only managed to beat out Chick-fil-A in three states. 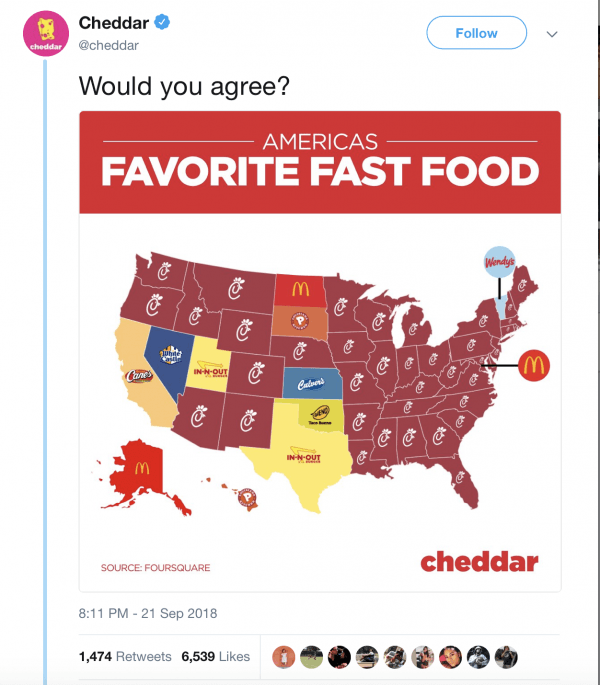 Chick-fil-A has been defying liberals for years by refusing to stray from their strong Christian beliefs. Despite the fact that they could make more money by staying open on Sundays, Chick-fil-A continues to stay closed to give their employees a chance to go to church and get a day’s rest.

The chain also managed to survive a 2012 scandal in which chief operating officer Dan T. Cathy opened up about opposing same-sex marriage due to his faith.

“We are very much supportive of the family — the biblical definition of the family unit. We are a family-owned business, a family-led business, and we are married to our first wives. We give God thanks for that,” Casey said. “We operate as a family business … our restaurants are typically led by families; some are single. We want to do anything we possibly can to strengthen families. We are very much committed to that.”

After this, liberals stepped up their efforts to get the restaurant chain shut down, but as you can see, they haven’t gotten very far at all. Clearly, the vast majority of Americans respect Chick-fil-A for being a business that is not afraid to stick to their values. Oh, and the chicken is delicious as well!

Sequel to Godzilla vs. Kong Gets Its Release Date, Will Feature Godzilla