Hello everyone! The Biggest Party of the Summer is here, and what a scorching Summer party it is fixing to be. WWE has gotten both brands together for it’s big showdown, and basically every major title is on the line. We’ve got some big matches and high drama as the spectacle is in Brooklyn for the fourth consecutive year (and with WrestleMania in Jersey next year, thus endeth the streak). The major attractions tonight, of course, are the mid-card and top-card titles-Seth Rollins versus Dolph Ziggler for the Intercontinental Championship, Jeff Hardy versus Shinsuke Nakamura for the United States title, the SmackDown women’s title on the line in a triple threat match, Ronda Rousey looking to do the expected and claim the RAW women’s title, and of course, Roman Reigns looking to dethrone Brock Lesnar. Buckle up, boys and girls, for it is time to crack open this Nutshell!

Hands down, the Intercontinental Championship. And to think, it went on first for the main card. 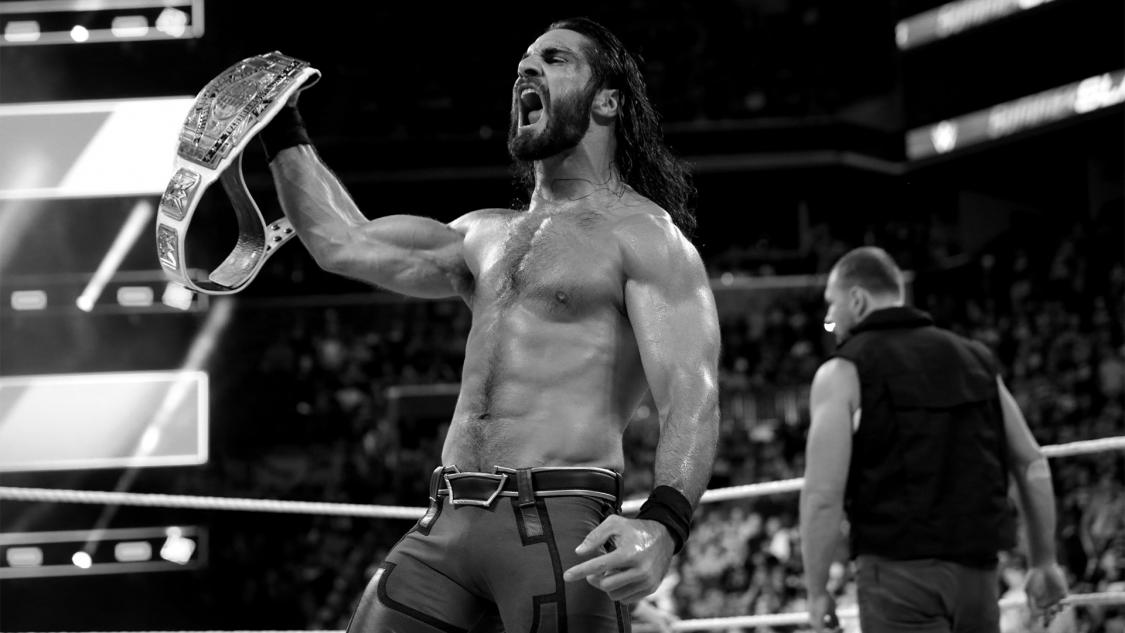 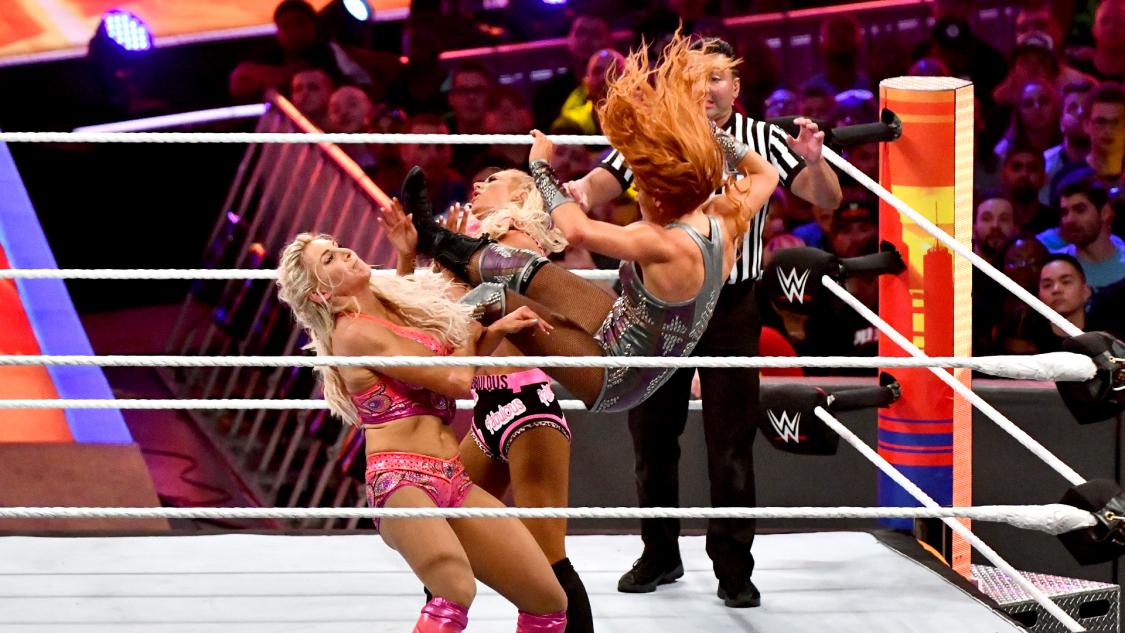 Probably can give this to Kevin Owens and Strowman. It was bad. Wonder who Kevin ticked off, to take a loss that one sided. 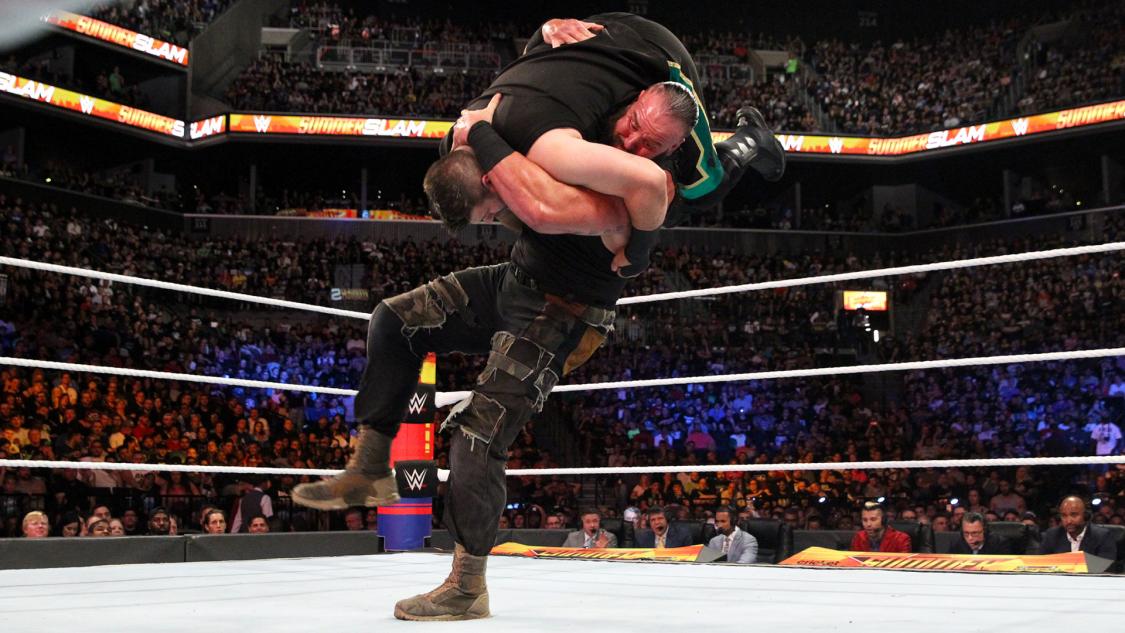 I could say Roman Reigns, because he finally got what we all didn’t want him to get. 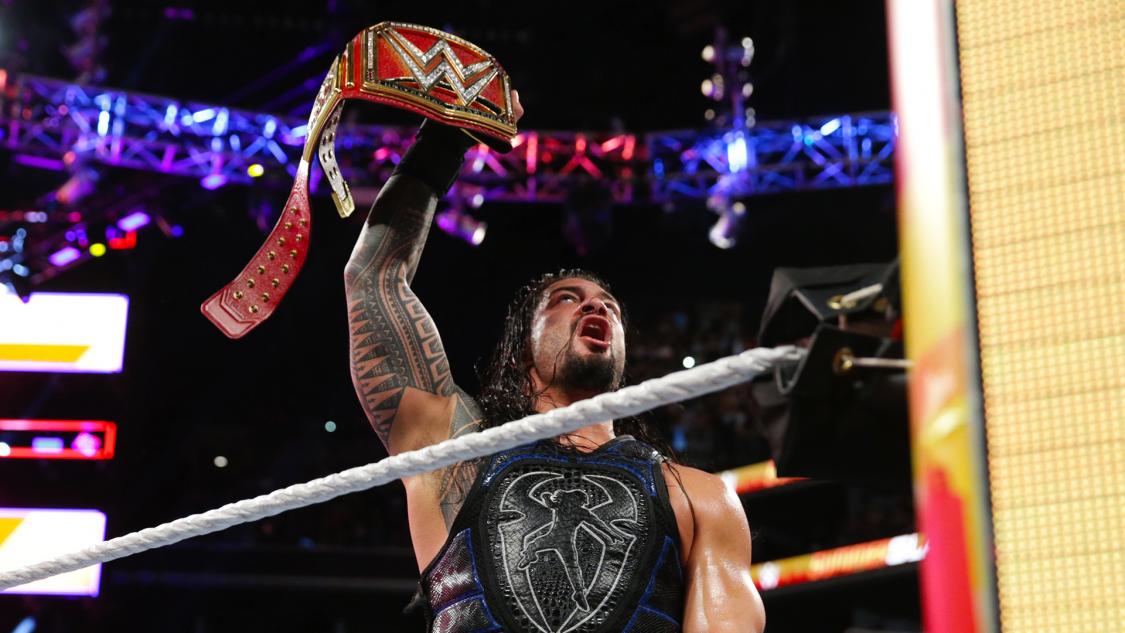 But, it’s his other Shield brother, Seth Rollins, who takes this one.

Liked the moonsault into reverse DDT by AJ. 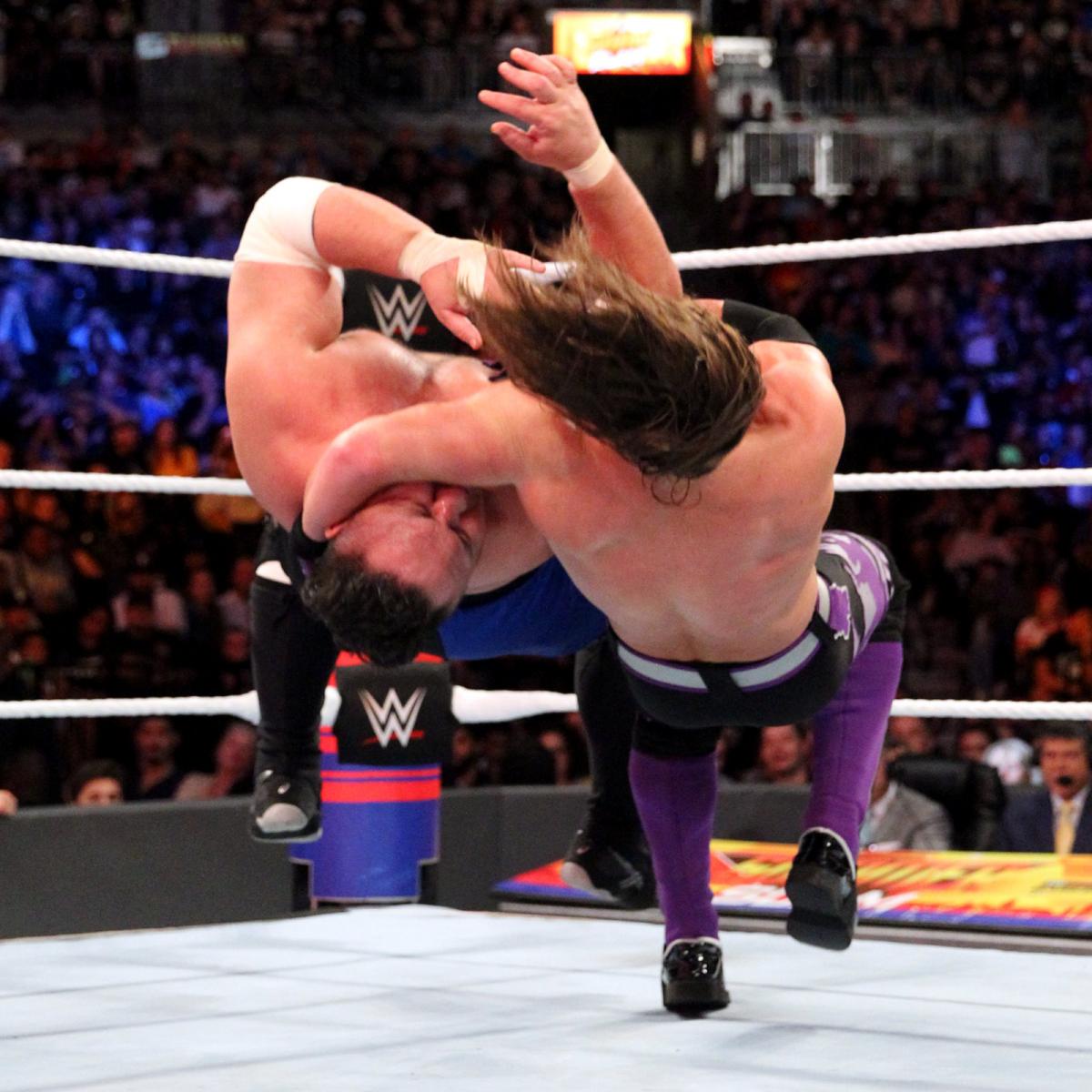 And then there’s perhaps the spot of the night. After he was flung into the steps (a spot that did not look like he’d be coming up bloody), AJ stood there as Joe grabbed a mic, stood on the announce table and talked trash to AJ’s family. Styles got up, leapt onto the table and speared Joe through the ringside barriers. AJ then completely snapped with the chair, earning him the DQ. 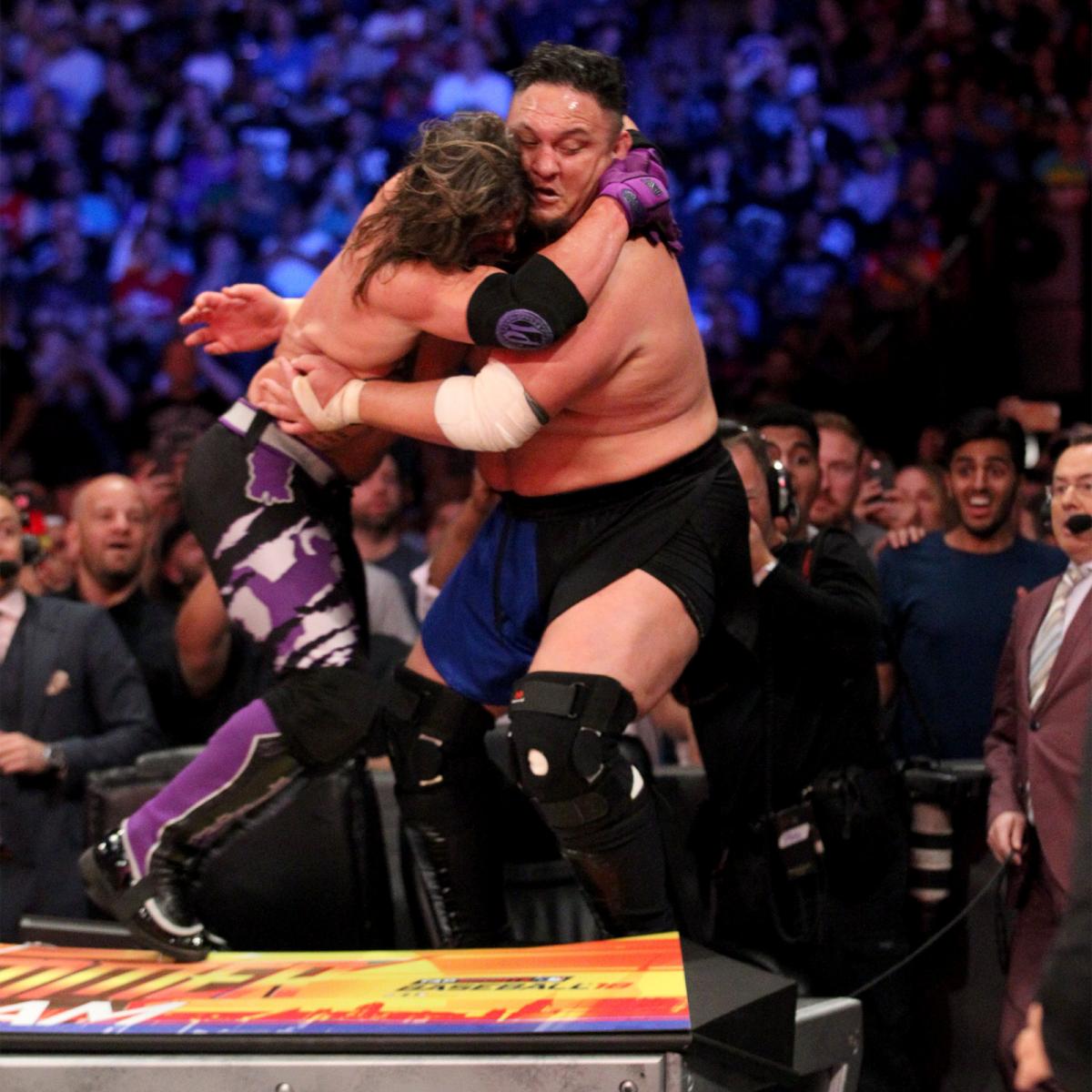 Kevin Owens. That match was like, two minutes long, and it was a nothing thing. When the match was first announced, this could have been high drama. By the time it happened, it was a dud. My guess is part of the reason for the squash was Braun working again later, but considering the time between his match and the main event, surely he could have worked a somewhat longer match, even if we got the same outcome.

The ringside employees as AJ snapped. 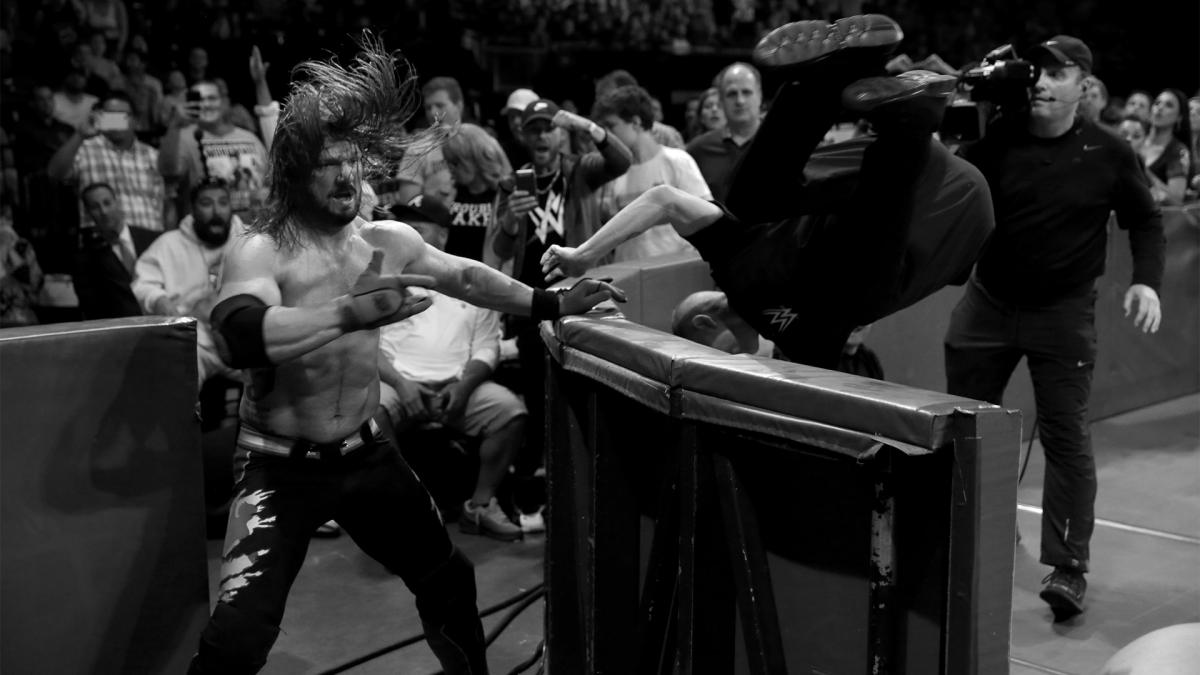 Baron Corbin. Because he basically jobbed out tonight too. But more on that later. 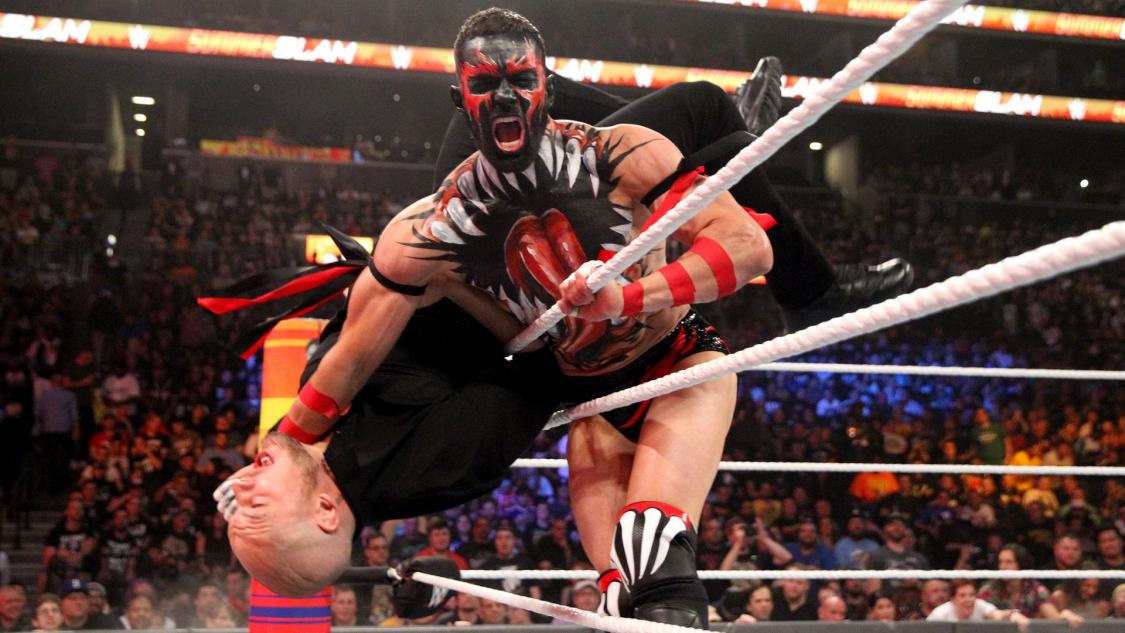 From a match perspective, none. Though I think we can agree that Becky (and Charlotte) might be upset tonight.

Of all the turns I think we expected or guessed at…having Becky Lynch snap was not on my list. I have to say though, I liked it. Lynch felt wronged by Charlotte being added to the match, and when Charlotte won the belt, she went off. Fans didn’t all seem to hate Becky for it, either, which I think is a good thing. Honestly, this was probably how RAW should have done the Bayley/Sasha bit, and now if the hugging ends, it won’t feel all that fresh or new or interesting. 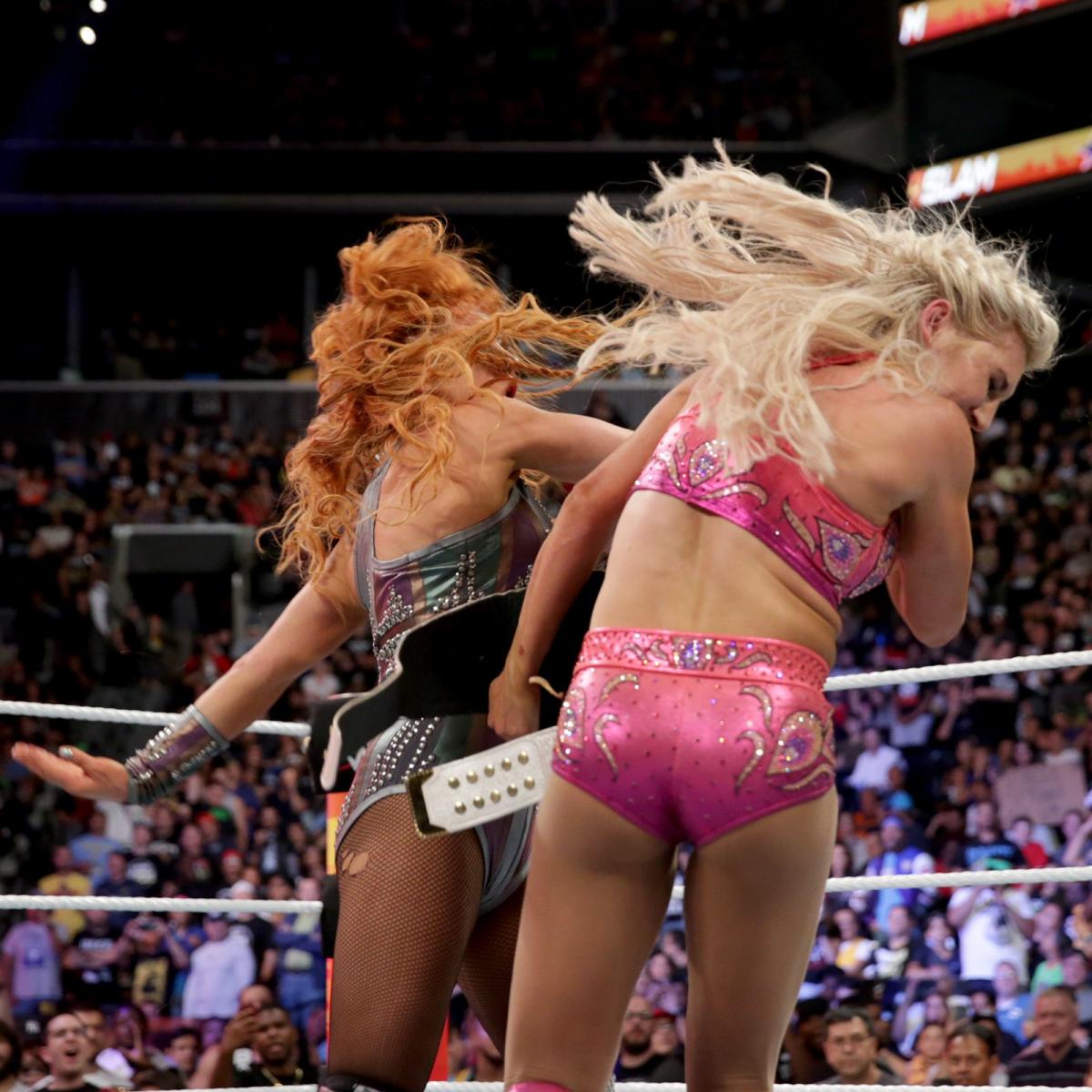 Elias had guitar issues, as I dare say he wasn’t going on stage expecting his guitar to fail him. 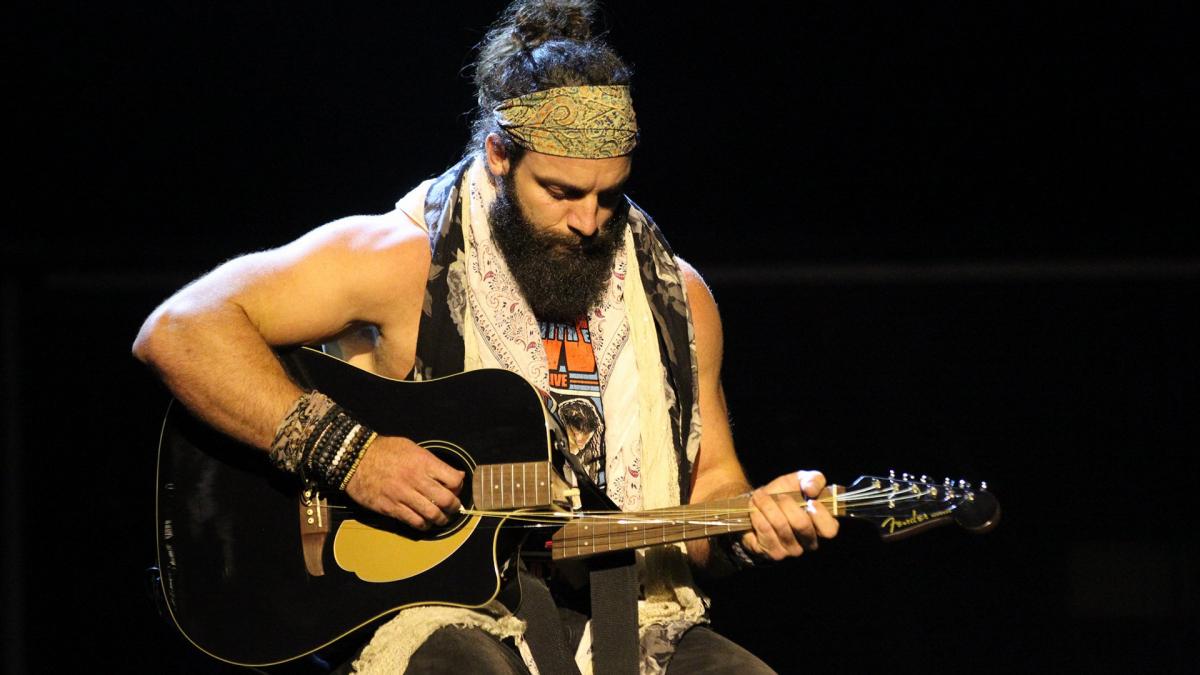 So, early on in the Joe/Styles match, when AJ rolled to the outside, ran around the ring, leapt onto the apron and went to kick Joe? Not sure you’d go so far as to say “botch”, but it did not look well executed. Like there was a hesitation or a delay…just wasn’t as fluid a spot as you’d have hoped for (especially when compared to the power slam spot they executed later in the match).

But for me, the single most egregious one of the night (and if I mis-heard, please someone correct me) was Michael Cole as Natalya approached the ring. And he said it was a rough couple weeks for her, as her father past away a couple weeks ago. He said it not once, but twice. And Jim “The Anvil” Neidhart only died last week. Not two, barely even one.

It’s my first time seeing it live, I don’t understand why he doesn’t do this more often (paraphrasing about Balor’s alter ego paint job. Gee, could you imagine him employing the air brush artist to do that every week, or every day? First, no. Second, it would ruin the Demon persona, as you never know when that’s what you will get.

Can someone get me the number for Doctor Venkman?

The B-Team, interacting with Miz back stage. Seriously, someone is pushing the right buttons right now.

Also, could have easily put this in the holy [email protected]# spot too…but how about Braun Strowman calling Brock Lesnar “baby boy”

So, in an interesting twist, Braun’s music played right after Brock’s stopped. He came out and addressed both men, and simply said that he would be right there waiting to cash in on whomever won. And he actually stood there, and was somewhat involved, in the sense that Roman drilled him with a dive meant for Lesnar, and then Brock gave him an F-5 on the outside for good measure. It was a decent way to tease a cash-in tonight, without there being an actual cash-in. Will there be on RAW? Guess we will have to stay tuned to find out. 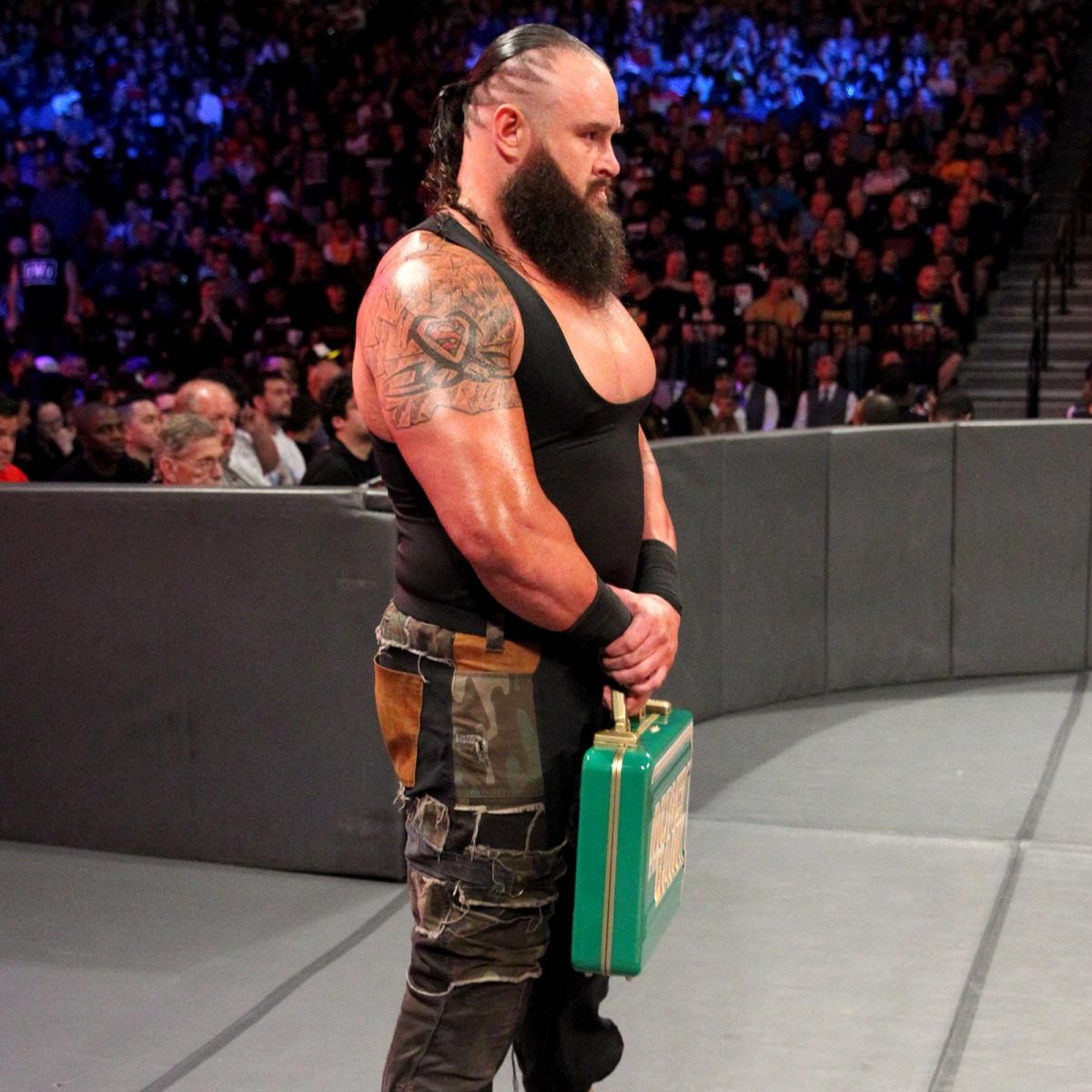 Natalya, wrapping up a very emotional and tough week for her, was in Brooklyn to watch her friend win the women’s title. She got a nice ovation too. 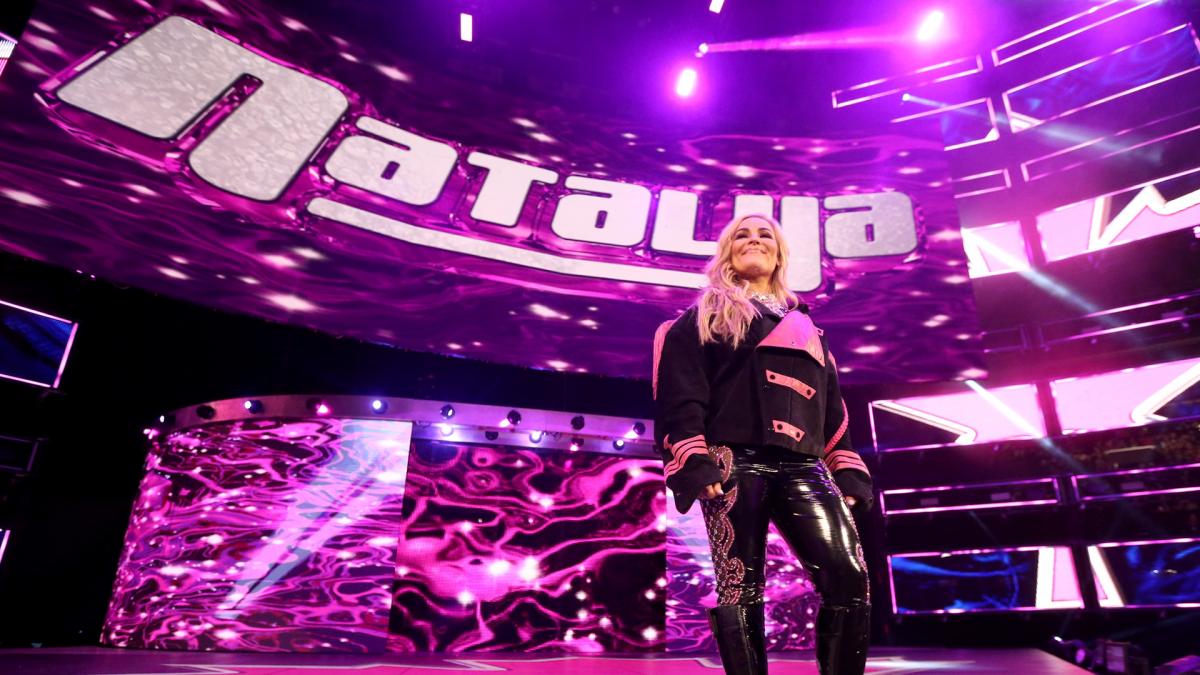 It will be interesting to see where Miz and Bryan go next, with Miz needing his wife to give him brass knuckles to win, and Bryan lamenting his struggling comeback in the locker room. My guess, at some point we see a couple versus couple mixed tag match. 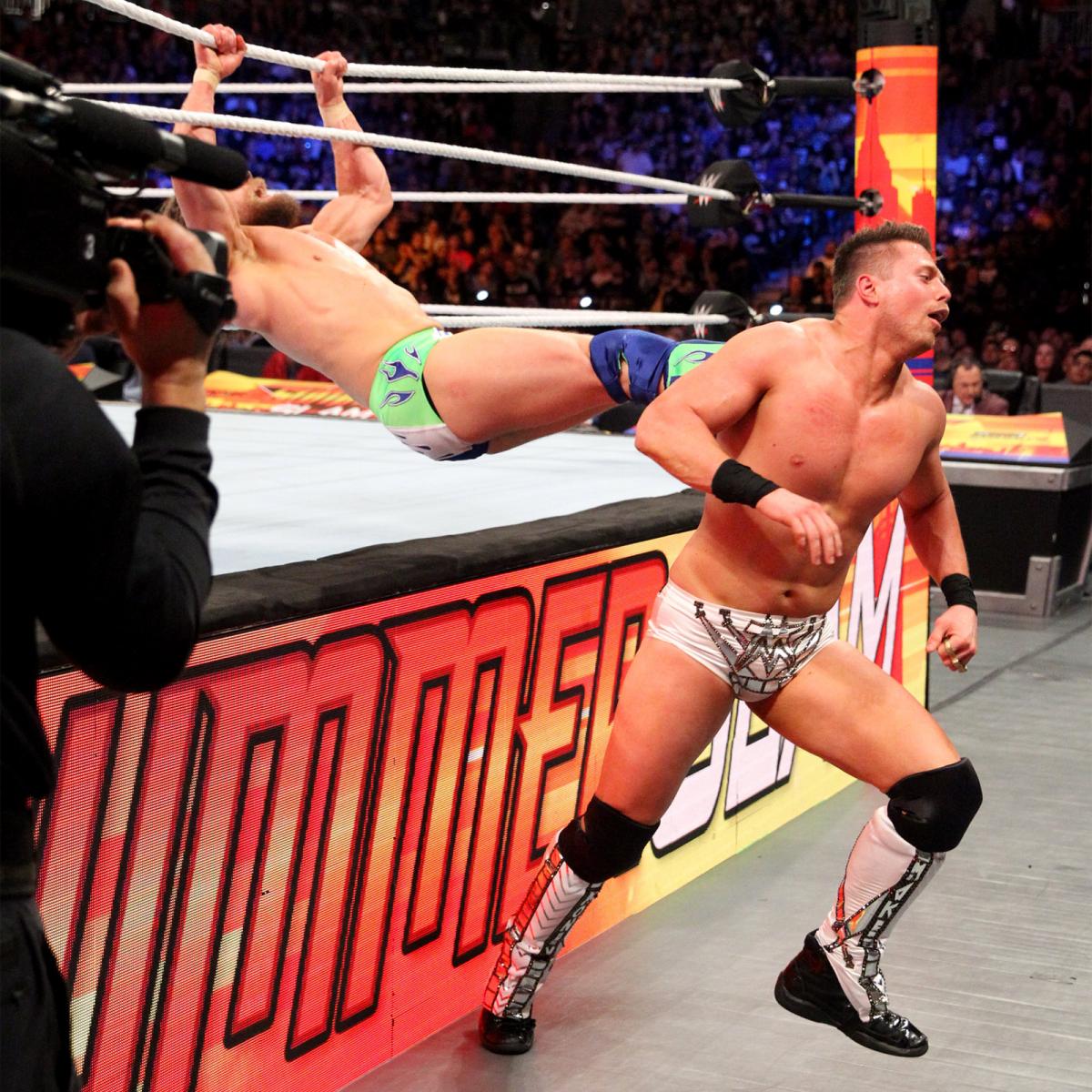 Could we finally be seeing WWE push Balor again? I love the unadvertised return of the Demon, as the announcers pointed out we had not see it in nearly a year. I loved the entrance, with the swirling clouds overhead. And I love how Corbin sold being freaked out and unprepared, trying to tell the official he didn’t sign on to wrestle the Demon. Balor dominated, and should be able to build off of that. 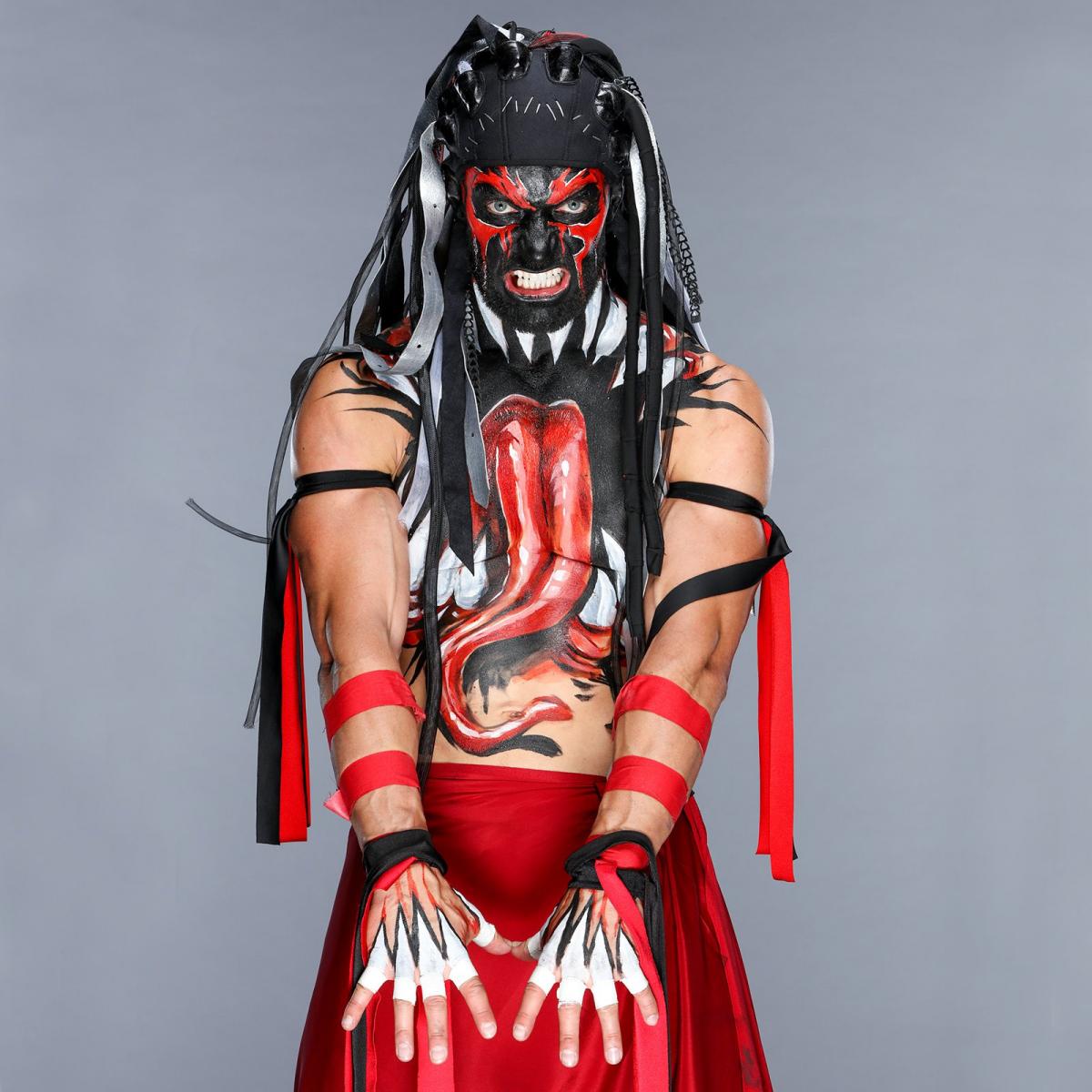 Rousey won gold fast. The match itself was anticlimactic, as we all expected her to win…and she was dominant. Reminded me of Lesnar over Cena a couple years back. Best part was the celebrating, with Natalya, the Bellas and her husband. 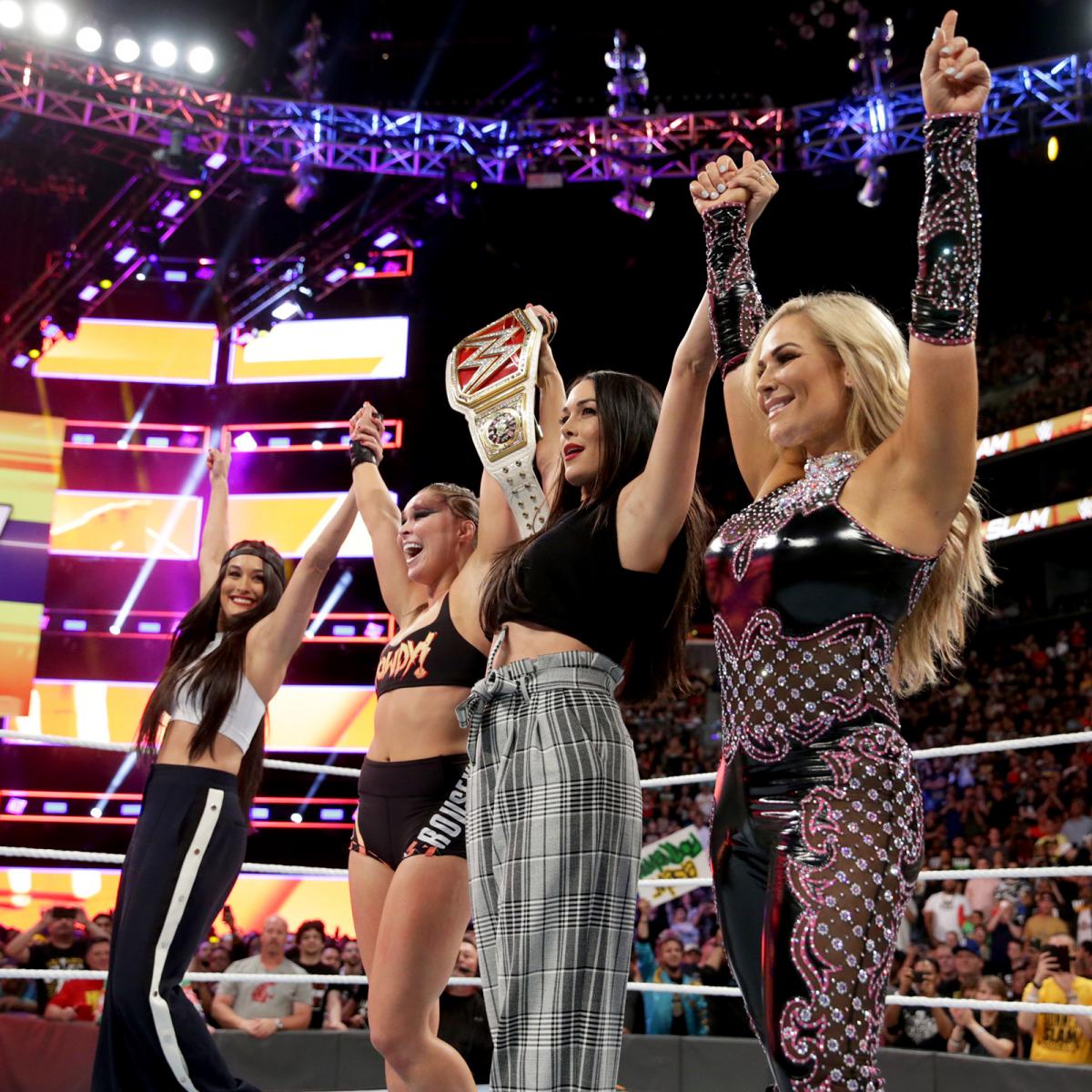 I suppose it added something to the match, and may add something to the feud, but I am not a huge fan of the angles that end up involving a wrestler’s young children. It was not great when Rock and Mick Foley beat each other with chairs as Mick’s young kids watched. It wasn’t all that great watching AJ’s young daughter not like what she saw out of daddy. Clearly she wasn’t pleased, because as soon as he took her from his wife, his daughter immediately wanted to go back to her mom. It’s like….wives and girlfriends (or boyfriends and husbands) can consent. They are old enough. The kids, at that age, don’t have a clue. 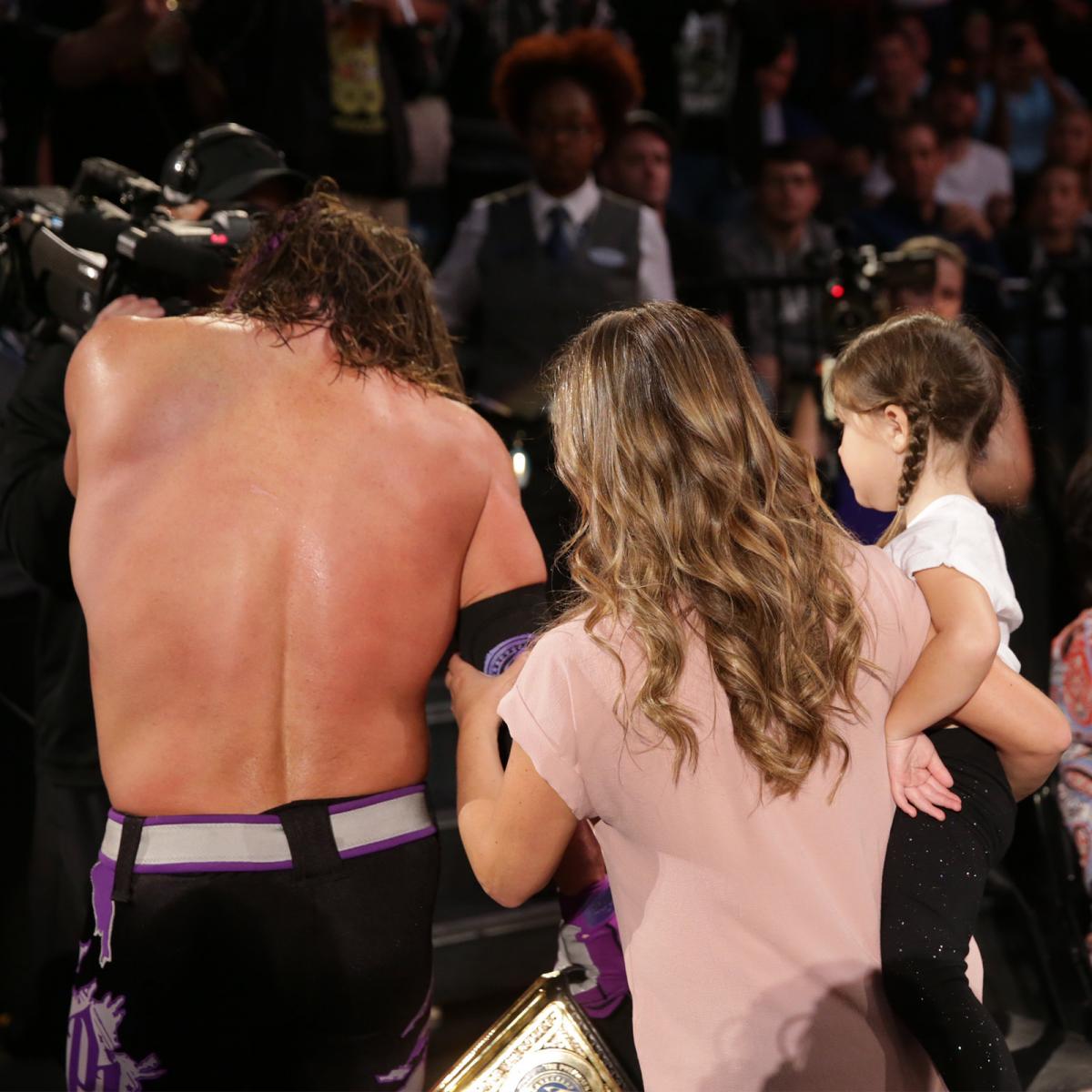 Bryan and Miz were good…at times. And while I get that the ending was a perfect heel ending…it felt like a weak finish. Not so much that the match was bad. More my expectations were very high, and it didn’t quite measure up.

The Intercontinental match stole the show.

Maybe, finally, moving on from Lesnar.

All in all, a solid SummerSlam. Fans probably wanted to see Strowman cash in, but we will have to wait. Feel good moment of the show was Seth Rollins winning the belt back, but we also have two new women’s champions and a new Universal Champion as well.

I am looking forward to the day-after shows, to see who (if anyone) comes up from NXT.