The First Amendment sets the United States apart from the rest of the world, but an alarming number of Americans cannot name a single right it guarantees.

The First Amendment is what sets the United States apart from the rest of the world, but an alarming number of Americans cannot name a single right it guarantees. 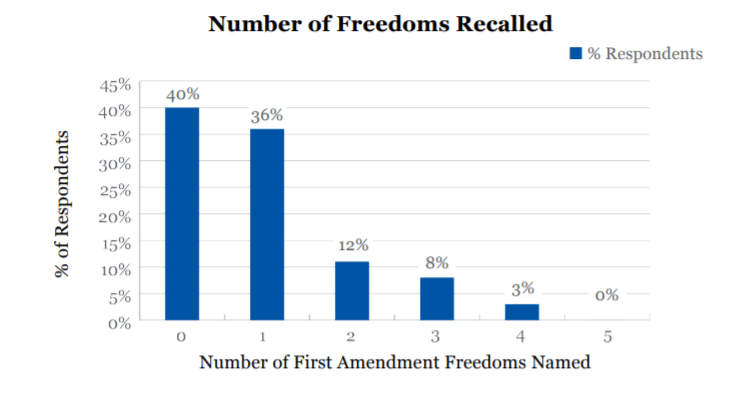 The five freedoms guaranteed under the First Amendment are, of course:

Furthermore, the survey found an interesting demographic breakdown among who remembered which freedoms:

There were also statistically significant demographic differences among those who could recall certain freedoms. For example, younger people (age 18–34) were more likely than older respondents to recall freedom of religion and the press. More educated, higher income respondents were more likely to recall freedom of speech, and more educated respondents were able to name more freedoms overall. Surprisingly, those with a religious identity were slightly less likely to be able to name freedom of religion (13%) than those who were not religious (17%).

While unfortunate, it’s unsurprising that younger, less educated Americans were less likely to recall freedom of speech as a First Amendment right. A growing number of young people – namely high school and college students – believe that “offensive” and “hate speech” should be censored, particularly on the internet. Interestingly, 60 percent of respondents making under $25,000 per year agreed that the government should require social media companies “to monitor and remove objectionable content from their sites,” including “hate speech,” “personal attacks,” and “false information.”

It seems, then, that America’s public education system is not only teaching young people to be intolerant of opposition, but also failing to adequately teach them about their rights to begin with.