Jeff Dunham’s Walter [1] is known for giving straight-forward and rather blunt commentary. The grumpy old man doesn’t care what anyone thinks of him.

If he has something to complain about, he will!

Walter’s responses will have you in stitches! But as usual, he charmed the crowd with his crotchety demeanor. 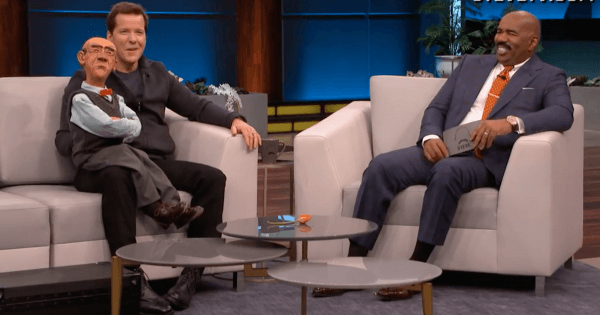 Walter begins by telling the audience to shut up! When he was asked his childhood nickname, Walter said it was the same as Steve’s. He claims both of these bald men were called Curly growing up. LOL!

The funniest part is when Steve asks Walter what his strangest habit is. “After I take a shower, I blow dry my nose hairs.” Steve chuckled as that certainly was something he couldn’t relate to doing!

You can see Walter’s hilarious interview in the video below.

Prior to bringing out Walter, Jeff Dunham [3] caused some problems on Steve [4]‘s set. He started messing with the tchotchkes on the coffee table.

Jeff couldn’t understand what they were. Frankly, neither can I! The set designer came out to give Jeff a judging eye. This didn’t deter Jeff.

The set designer removes the distracting decorations and Jeff immediately replaces them with some flowers.

Seconds later, Jeff moves the flowers, causing a mess on the table. Much to the horrors of neat freaks everywhere, Jeff grabs a pillow from the couch to clean the table.

This was too much for the set designer who came out and removed everything in order to keep it safe from Dunham’s hands! Jeff managed to cause all this trouble BEFORE Walter came out for his segment.

You can see Jeff disrupting the set in the video below.

Who would have thought Jeff Dunham [5] was one-man wrecking ball? Let’s hope the set designer has a good sense of humor!