Christmas is supposed to be a time of giving, but package thieves known as “porch pirates [1]” have unfortunately turned it into a time of stealing. Throughout the holiday season, thieving Grinches will go so far as to follow FedEx, UPS, and USPS trucks to snatch any unattended packages right off your porch. It’s a despicable practice, and major online company Amazon has been working on ways [2] to ensure that your packages aren’t left out in the open.

However, Jaireme Barrow of Tacoma, Washington was so sick of people stealing his packages that he rigged his own fix: a trap that, when triggered, shoots a 12-gauge shotgun blank and sends would-be thieves running.

Barrow, a Jeep Wrangler enthusiast, devised the system after people kept stealing his expensive Jeep modification parts. The trap is placed inside an ordinary cardboard box which Barrow sets on his front porch [3]. A fishing line is connected to a plate holding down the firing pin on one end and to the other side of the front door on the other. As Barrow explains, “When [the fishing line] is pulled the plate is moved releasing the pin and firing the blank.” 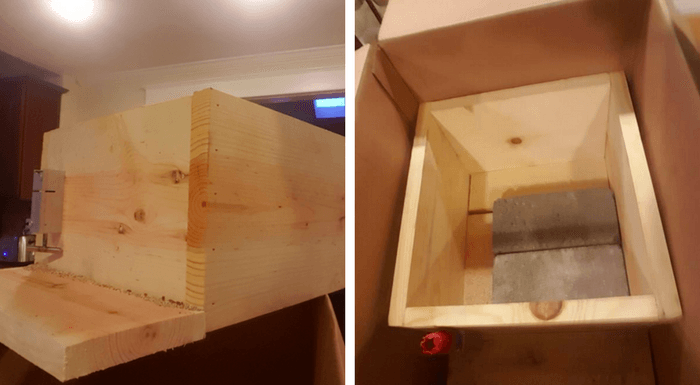 Barrow says the trap has scared off numerous thieves – and the videos of the trap in action are highly entertaining. Watch below!

In fact, Barrow’s trap has worked so well for him that he simplified the model and made it available to the public. You can purchase The Blank Box for roughly $50-$70, and order additional blanks for $2.99.

That’ll certainly teach anyone to steal from your front porch again.

Do you think the Blank Box is a good idea? Share this with your friends and family on Facebook so they can have some extra protection for their packages!