Dean Martin [1] and John Wayne were two stars who were down to earth and relatable to the average American. Sure, they were megastars, but they were laid back and fun.

Wayne and Martin Team Up

John Wayne wasn’t part of the Rat Pack, but he did pair up with Martin on some projects. The two even starred together in Rio Bravo [2] and Wayne came on Martin’s shows numerous times. 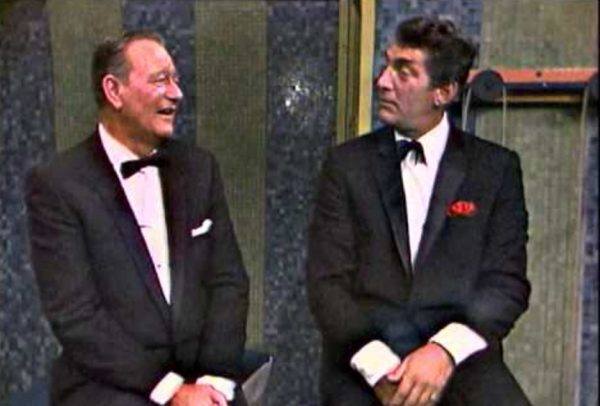 In the clip below, you can tell that they were good friends in real life.

But, did you know that the Duke could sing? He and Dino paired up to sing but the Duke blew everyone away.

He sounded just like Frank Sinatra [3]! Even Dino was surprised when John Wayne started singing!

Okay, so that wasn’t his voice but John Wayne [4] sure could lip sync with the best of them!

He pulled that off pretty well. These two joined forces on another song.

You can watch them perform “Don’t Fence Me In” in the video below. Duke adds a little more to it than he did in the lip sync video above.

John Wayne might not have been able to sing, but at least he could hum!

There was something so warm and inviting about these two when they entertained.

They were so relatable. You could imagine hanging out with them and laughing up a storm!

Wayne and Martin [5] were also patriotic Americans. While it’s hard to find A-list stars today who wear their love for America on their sleeves, these two powerhouses sure did.

Duke appeared on Dino’s show to discuss how he was teaching his young daughter to be a good American.

He made sure that she knew to support and respect our veterans and be proud of our country. Click here [6] to watch that video.

These two men were great examples of Hollywood at its best. Hollywood certainly doesn’t create stars like these anymore.