Linda Sarsour has become a heroine among the feminist left. But in reality, she’s an anti-Semite and pro-Palestinian rabble-rousser and reports are now showing she may also be guilty of fraud. Rock star Courtney Love brought attention to the controversy over Twitter:

You're a vile disgrace to women and all mankind @lsarsour

Now, here’s the backstory. According to The Daily Caller, Sarsour is raising money for the “victim” of a hate crime that doesn’t at all match the actual facts of what occurred. Here is a tweet Sarsour sent out:

We must unite against hate. Please support Rahma who was brutally beaten in an alleged hate crime in Columbus, OH. https://t.co/cQ5tnkz5t9 pic.twitter.com/A49Ya1VuUR

According to Sarsour and the alleged victim Rahma Warsame, the latter was attacked by a white man who shouted, “You will all be shipped back to Africa!”

But according to Samantha Rosales, Sarsour has the story wrong. Morales (who is of Mexican heritage) says she was attacked by a mob of men and women, including Warsame, in a neighborhood argument over her son. She said, “What happened is not what she is claiming. The woman that is in the hospital, I feel sorry for her, but she is one of the women who was kicking and hitting me after I got tased.”

Morales’s boyfriend, Ricky Boyce, is the one who Sarsour and Warsame say yelled racial epithets. But Boyce said he only got involved when he saw his girlfriend getting beat up.

“I didn’t even have time to talk to any of them because they were over there jumping [Morales] at the time,” said Boyce.

The police report backs up the claims by Morales and Boyce. Check it out: 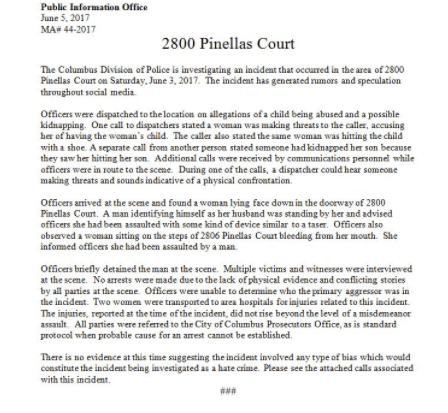 That’s an official police report, not the ramblings of some huckster who’s trying to make buck off somebody else’s misery.

Share this story to let others know that Sarsour is committing fraud!